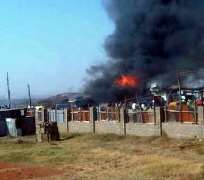 SAN FRANCISCO, December 8, (THEWILL) – The Wednesday explosion in Kaduna that killed about 8 persons in an auto spare parts market run by mostly Igbo traders from Eastern Nigeria was a bomb, the Red Cross said Thursday.

An internal Red Cross report seen today by The Associated Press says that two men on a motorbike had stopped in front of a shop in the city of Kaduna just before the explosion went off.

The Red Cross report corroborate accounts from eyewitnesses which said the blasts occurred after persons on two motorbikes threw plastic bags into the market.

But Kaduna State Police Spokesman Aminu Lawan told The Associated Press he was not aware of the Nigerian Red Cross report, but that the police's anti-bomb squad had concluded that the blast was accidental.

Lawan said the squad found acid batteries, a gas cylinder and other "active" materials stored in the small shop where the fire started.