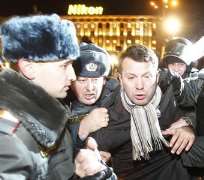 Prime Minister Vladimir Putin accused the United States on Thursday of stirring up protests against his 12-year rule and said foreign countries were spending hundreds of millions of dollars to influence Russian elections.

In his first public remarks about daily demonstrations over allegations that Sunday's election was slanted to favour his ruling party, Putin said Secretary of State Hillary Clinton had encouraged "mercenary" Kremlin foes by criticizing the vote.

"She set the tone for some opposition activists, gave them a signal, they heard this signal and started active work," Putin told supporters as he laid out plans for his campaign to return to the presidency in a March election.

Invoking Ukraine's 2004 Orange Revolution and the violent downfall of governments in Kyrgyzstan -- another fellow former Soviet republic where Moscow has suggested street protesters had U.S. support -- he said Western nations were spending heavily to foment political change in Russia.

"Pouring foreign money into electoral processes is particularly unacceptable," said Putin. "Hundreds of millions are being invested in this work. We need to work out forms of protection of our sovereignty, defense against interference from outside."

He added: "We have to think of ways to tighten accountability for those who carry out the aims of foreign states to influence domestic political processes."

ANTI-WESTERN RHETORIC
Putin's remarks echoed the tough anti-Western rhetoric he employed in his 2000-2008 presidency to suggest Western nations were funding Kremlin critics to try to weaken Russia and prevent its resurgence after the collapse of the Soviet Union in 1991.

He has turned increasingly to the same tough talk since revealing in September that he planned to swap jobs with President Dmitry Medvedev next year.

Accepting his United Russia party's nomination as a presidential candidate last month, he warned that the West would seek to influence the parliamentary and presidential votes.

"What is there to say? We are a big nuclear power and remain so. This raises certain concerns with our partners. They try to shake us up so that we don't forget who is boss on our planet," Putin said.

The United States and the European Union have expressed concern about the conduct of the Russian election and the treatment of peaceful protesters. Clinton suggested on Tuesday that the vote was not free or fair.

At a conference at NATO headquarters after Putin made his remarks, she said she had expressed "well-founded" concerns.

Voters bruised Putin in Sunday's election by reducing his party's majority in the lower house, undermining his mandate as he prepares to return to the Kremlin.

Putin remains Russia's most popular politician and could potentially have two more terms, ruling until 2024.

But polls show his approval rating has fallen from previous heights, and the decline in support for his ruling party was a sign of frustration with the political system he has put in place, in which many Russians feel they have no influence.

About 5,000 people turned out on Monday night for the largest opposition protest in Moscow in years. Smaller protests have followed despite a police crackdown and former Soviet leader Mikhail Gorbachev called on Wednesday for a new election.

NO NEW VOTE
President Dmitry Medvedev said alleged violations should be investigated but made clear the Kremlin had no intention of annulling the election.

"The most important thing today is to calm one's nerves and allow the new parliament to start work," Medvedev told reporters in Prague after talks with Czech President Vaclav Klaus.

Medvedev said protests were a sign of democracy and were welcome as long as they are held within the confines of the law, which Russian authorities says means winning advance permission.

Police have detained more than 1,000 people in Moscow and St Petersburg but new protests are planned on Saturday.

Putin, a former Soviet KGB spy, has often used anti-Western rhetoric for domestic purposes. Analysts said his remarks, shown a length on state television, were aimed chiefly at Russians to discredit protesters and blunt calls for an end to his rule.

"He has to somehow explain what is happening," said Fyodor Lukyanov, editor of the journal Russia in Foreign Affairs.

"Nobody will acknowledge that something did not go right and that the political situation is changing, and not in favour of the authorities. And so the easiest thing is to explain it as meddling by external forces," he said.

Lilia Shevtsova, a senior associate at the Carnegie Moscow Centre, said the remarks made him look out of touch.

Lukyanov said Russian-U.S. relations, improved since President Barack Obama launched a "reset" in 2009 but troubled by a dispute over a European missile shield, would be tense with presidential votes approaching next year in both countries.

But he said Russia was not likely to withdraw support for the NATO campaign in Afghanistan, which it aids by allowing transit of supplies and equipment across its territory.

"There is no aim of ruining relations. There is a need to neutralize U.S. comments about the election and their potential influence internally" in Russia, he said.