‘I’m The Future Of Nollywood’----Anita Joseph 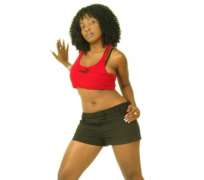 Anita Joseph, one of Nigeria's newest stars on television says she is one of the talents that will bring glory to the Nigerian movie industry.
She said she is working harder than she has ever done to bring this to pass. The pretty actress said in the last one month she has moved in and out of five movie locations, though all the five movies are still at production stage.

In one of the movies, Anita is playing a rebellious lesbian in a flick by a new director, Humprey Agun, with Lagos as the main location. Done with that, the actress flew into Port Harcourt to play the role of a drug baron in another movie. Anita, back in Lagos, hit another movie location to work the pole as a stripper in a Tony Mex movie alongside Liberian hunk Frank Atus. From the FESTAC town set as a shot stripper, Anita moved to Warri, Delta State to co-star with Alex Osifo and Yemi Blaq in a Christian flick, before returning to the Garden city again for Total Bliss and later to Abuja for another production, Queen of the Pack. In spite of her very tight schedule, the actress cum singer promised to deliver the best in all her roles.

“The most interesting thing in acting is that you have the chance of being so many things and so many people at different points. You can be an 18th century diva today, and the next day, a drug baron. While you know nothing about all these characters, in order to achieve perfection, you must trust in God and hard work,” she explained.

She adds: “It was fun playing a druglord. But my biggest joy came from the fact that I had the chance to act as agent of change that will let young ones know the danger of hard drugs.”

In between this busy schedule, Anita still sneaks in and out of the studio for her music. She is discussing with two of Nigeria's talented producers, TY Mix and Dr Frabz,