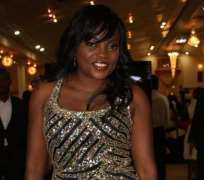 As the saying goes,a good fish has no hiding place.No doubt,since she came into the movie industry,her profile has always been on the rise and her works definitely are beginning to speak for her.

On Sunday, 27th November 2011,this talented actress we gathered won two different awards in a day.Adding to several others she has gotten earlier.

Her sister also was said to have engaged to a popular journalist,Ola Mohammed that same day.