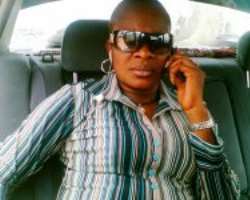 Talented costumer, dancer-actress, Millicent jack, the immediate past vice president of Actors Guild of Nigeria{south-south},is the CEO of kilali Kreative Minds, based in port Harcourt .

In this interview, the best costumer of AMAA 2006, who have acted in movies like golden crown, labister, etc, spoke on the way forward for the AGN with Eric jeminiwa.

My name is millicient jack,I hail from Akuku-toru LGA in rivers state. I started my art career with Nabai theatre group in UST,from where I moved to the popular willy-willy theatre group then.Iam a gradute of the theatre arts from the presigous university of port Harcourt, with specialisation in children thaetre.

WHY I PARTICIPATED IN THE PORT HARCOURT AGN ELECTION

Firstly my tenure as the south-south vice president of the guild has elapsed and i strongly believe in democracy,though iam not a politian.secondly,when i got to the venue of the election,i saw highly respected actor like sam loco-Efe presiding over the election ,that produced segun arinze as the president of actors guild of nigeria with other elected national officers of the guild,which to me has given the election credibility.

Words are very scarce in my mouth.The on going leadership crisis is not pleasant to the ears. Nollywood started very well on a good note .with the actors guild of Nigeria {AGN},which came with the sanitization in 2003. TO me AGN is like a growing child that just started crawling but was interrupted with distractions from outside. who knows of what benefit the crisis is to them .I am not a politician but I suggest we should go back to the tree of love, to love one another because presently the tree of love have being caught off.

The two groups should come together{talking of Ejike Asiegbu and kanayo.o.kanayo}.It is Silly and Stupid that two mature people will be at logger heads. AS actors, we are the mirror of the society, a front runner in the nation building and the Re-branding project. we should stop washing our dirts on pages of the newspapers. To the best of my knowledge, the two of them are friends. Ejike Asiegu, once told me that kanayo.o. kanayo was his bestman during his wedding. we need to reconcile the two groups,to put the nollywood industry on right track.the actors guild{AGN} need to speak with one voice to make the reconciliation a success.

It is the mind of God. God is the owner of creativity. The kilali creative minds actually started in my university days in 1994 during the long strike, Which lasted for a whole year .I told myself that I can't sit down doing nothing. It began with kilali kiddies ,then I use to take the kiddies to shell club, Elf club and others. After my graduation, I went to Lagos because I wanted to be in front of cameras but it didn't work out well because some of the producers then wanted me to pay my dues in bed .I told myself I can't do this,iam agraduate of theatre arts. one day, I packed my things and headed back to port Harcourt .But God brought me back to entertainment scene through costume designing where I won the best costumer in AMAA 2006.Kilali creative minds is not all about me but with other like minded people, we Are Engaged in costume designing, cultural display, Decorations, kiddies shows and event management.

BREAK IN THE INDUSTRY

One day francis duru came to me to do costume for a movie tittled 'king jaj a of opobo',but I told him why don't you give it to late Dr. Amatu Braide, so I can work under her because she is my mentor, mother, she taught me everything I know in the industry. He said no, we saw other people before coming to you. I then said okay and he dropped the script with me but I didn't touch it for two weeks. One faithful morning after my morning devotion, I heard a voice spoke three times to me saying, 'go take the script and read it'. I read the script, after which I went to Nkwerre where the late king jaja of opobo was born and to opobo.I was able to gather my costumes with the help of Adonye pepple. Then I went for the film in lagos, which turn out a great success for me, that brought out my breakthrough in costuming.

Style to me is creativity, it is innovative and originality. Style is an innovation from creative mind of an individual.

I just concluded a training of sixteen repentant militants, who graduated from the Rivers state social Rrehabilitation Programme, which took place in Okehi in Etche LGA. It was a huge Success. The youths are rearing to go in Nolywood industry.you just watchout for them.

Entertainment is one industry one can't live without .we can channel the minds of the youths in Niger Delta and the Nigerian youths at large from violence to focus on Entertainment which will not only put food on their table but can make them a houlsehold name . My advice for the youth is to get Educated. without education,you are a nobody.please put your talent in what you believe in, not violence, drugs. God has endowed everybody with a particular property to make success. so it's now up to you to discover what talent God has given you.

Am fulfilled with what am doing in entertainment industry. Entertainment gives life ,love and joy. I could remember that my mother wanted me to become a lawyer and my father wanted me to be an accountant but with encouragement from late Amatu Braide, IAM what IAM Today. My parents are now very proud hearing my name doing al l these things.