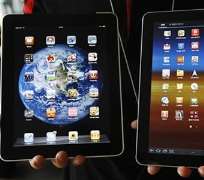 A court error on Friday offered a brief glimpse at information that Apple Inc and Samsung Electronics have tried to shield from the public during their high-stakes patent litigation.

The material appears to be less important for what it says about the companies than what it reveals about efforts to keep court proceedings secret.

In denying Apple's bid to stop Samsung from selling its Galaxy smartphone and tablets in the United States, District Judge Lucy Koh's ruling inadvertently included details she had intended to black out. The judge's staff quickly realized the error, sealed the electronic document and posted a redacted version four hours later.

The fuller version, which Reuters obtained while it was publicly available, did not expose the technical inner workings of the iPad -- or anything close. Rather, it contained internal company analysis about the smartphone market, as well as some details about Apple's patent licensing relationships with other tech companies.

The case is scheduled for trial next year. The Friday ruling means Samsung can continue selling Galaxy products for now.

Sealing documents has become standard in intellectual property cases. Investors, academics and other observers have expressed concern that some judges too readily accede to litigants' claims that documents contain trade secrets and must be kept private.

Judges have wide latitude in granting company sealing requests, and Koh has granted all of Apple and Samsung's requests to keep documents secret in the case.

Some crucial legal briefs from both companies were kept entirely secret for months, and then released with redactions. After an inquiry from Reuters last week, Koh issued new guidelines so that redacted briefs become public much sooner.

Timothy Holbrook, an intellectual property professor at Emory Law in Atlanta who reviewed Koh's Friday ruling at Reuters' request, said there did not appear to be any trade secrets among the blacked-out portions.

"Most of it just seems like it was sealed out of an abundance of caution," Holbrook said.

SMARTPHONE, TABLET BATTLE
The California case is just one battleground in Apple and Samsung's bruising legal war, which includes more than 20 cases in 10 countries as they jostle for the top spot in the smartphone and tablet markets.

Global tablet sales are expected to explode to more than 50 million in 2011. Apple, which has sold more than 30 million iPads so far, is expected to continue to dominate the market in the near term.

While Amazon.com has also entered the fray with its Kindle Fire tablet, Samsung's Galaxy line-up is widely deemed the closest rival to the iPad in terms of capability and design.

In her 65-page ruling denying Apple's request for a preliminary injunction against Samsung, Koh attempted to redact nearly two dozen sentences or short fragments. But because of a formatting characteristic in the prior electronic version, the redacted material can be viewed by copying text from the PDF and pasting it into another document.

The version now available to the public cannot be viewed in such a manner.

According to the redacted portions, Apple's own studies show that existing customers are unlikely to switch from iPhones to Samsung devices. Instead, the evidence suggests an increase in sales of Samsung smartphones is likely to come at the expense of other smartphones with Android operating systems, Koh wrote.

In arguing against the injunction, Samsung -- which is also a huge components supplier to Apple -- said Apple's supply cannot keep up with market demand for smartphone products. Koh recounted the argument in the redacted portions of the ruling.

But Koh then called Samsung's argument "dubious," given rebuttal evidence presented by Apple regarding its ability to keep up with demand in the long term.

The redacted portions also refer to licensing deals that Apple struck with other high-tech companies over one of its key patents. Issued in December 2008, the patent covers the method of scrolling documents and images on Apple's touch-screen devices.

Apple has already licensed the patent to IBM and Nokia, according to the ruling. A technology blog, The Verge, first reported this detail on Saturday; the blog said it had been shown two statements that were redacted from the ruling.

Scant information has previously been made available about Apple's licensing deals with Nokia or IBM.

While Apple and Nokia publicly announced a patent settlement for an undisclosed sum in June, they did not divulge any specifics, except to say the agreement resolved all litigation between the companies and that Apple would make a one-time payment to Nokia and pay future royalties. At the time, the settlement was viewed as a victory for Nokia.

There appears to be no reference to any patent-licensing deal for mobile technology between IBM and Apple either in news archives or company regulatory filings.

"Apple doesn't license much, and it could be that they don't want people to know who the licensees are," said Holbrook, the IP professor.

Representatives for IBM and Nokia did not immediately respond to requests for comment on Monday.

Samsung was also offered a royalty license during negotiations with Apple in November 2010, the ruling says, five months before Apple wound up suing Samsung in the United States.

Apple has brought claims against Samsung based on design patents -- which protect the look and feel of a device -- and so-called "utility" patents, which cover engineering innovations.

A footnote in the ruling says "it does not appear" that Apple and Samsung discussed design patents during their negotiations that preceded the lawsuit.

Yet since much of Koh's opinion covers design patents, the mistakenly released data does not reveal much about the inner workings of the technology, said Holbrook.

"There was nothing I saw that was shocking, just stuff that is not (otherwise) available to the public," he said.