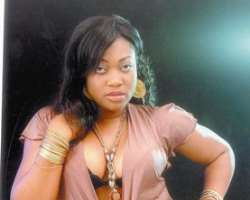 Physical disability in the past was seen as a kind of disease but not any more as those whom we refer to as the physically challenged are gradually becoming the celebrities of our time. The question Bridget Amaraegbu tried to look at this week is whether physical disability can be a barrier to true love and these are my findings.
Enjoy it:

The truth remains that most Nigerians will not like to associate themselves with any person who is physically challenged not to go as far as marry them. But what annoys me with some of these physically challenged people is that most of them reluctantly remain lazy in the name of physical disability which makes them remain within a particular class.

I tell you that they're actually the ones who condemn themselves even before another person does. When I walk on the streets and see these physically challenged people who have surrendered to begging as if they were not created in the same image and likeness of God as me and you, I get furious.

The school provided a platform for all, they were taught to read and write, they were equally given special training skills. These skills ranged from tailoring, shoe making, hair dressing and all kinds of craft.Back in my school days, most of these physically challenged people were more intelligent than some of us who thought we are complete.

Infact they made sure that they were always taking the first positions in class so that there won't be anything we could use against them. I grew up around physically challenged people so I don't see them from a different dimension. I see them like any other human being in the society so I can fall in love with a physically challenged man because they're normal people like you and I. Their sense of reasoning is perfect.

The fact that he's blind or crippled does not affect his brain. Today physically challenged people are musicians, actors, authors, pastors and everything you can think about.Those who think that they're helpless because they're disabled in one way or the other are just wasting their time and being lazy for all I care. I tell you some of the IT personnel in most organisations today are people on the wheel chairs but they're working and earning a decent living.

I equally know of some people on the same wheelchair who're journalists so there's no excuse whatsoever to be daft in the name of being physically challenged. Whether you're blind, deaf and dumb or crippled, there's always some kind of job that you can fit into. If you have the opportunity of going to school to become a graduate, please do and if you don't have the resources to attend a higher institution then learn a trade or better still become an artisan.

I urge you to grab something and start doing today and the opposite sex will appreciate you and want to marry you. I tell you my dear, if every person who is physically challenged in our society becomes hardworking and earn well to take care of themselves and people around them, we'll gradually forget that word 'physically challenged' and I'm looking forward to that soon.

When some people talk about the physically challenged, they present them as people who are good for nothing but things are changing and most of these people are coming up strong. Don't be surprised if a cripple becomes the manager of an organisation or hold public office or own these organisations themselves because it is coming to that.

And incase you don't know, physically challenged people are gradually taking over vital positions in the society so nobody should take it as an excuse for laziness.

I loved one before
— Moses Armstrong, Actor

There's nothing wrong with falling in love with a physically challenged person because they're people just like me and you. I've had the opportunity of loving a cripple girl while I was in school and then I was always willing to assist her in every little way I could. We didn't get married because we parted ways after school not because she's crippled. If a physically challenged has all the qualities I want in a woman, why not?

Why not
—Kehinde Olorunyomi, Actress and script writer

Do you know the motive behind these marriages? Certain persons would agree to marry them for different reasons far from the love they preach. We've heard stories where parents of a physically challenged would make certain promises to their supposed life partners for the marriage to hold. Let me just say that some people are bought over to marry such people.

I'm sorry to say this but love here in Nigeria hasn't got to that stage where there's no motive back stage. Any woman would jump at Ayefele, Cobhams or Aki and Paw Paw because they're celebrities and hardworking not because one love is pushing her from anywhere. Likewise any man would jump at a bank manager with a fat salary account who's on a wheelchair. Our people are bent on what they would get out of any relationship, we're yet to get to that stage where true and pure love can thrive.

Will marry a blindman if…
— Christy Ubong, Student

My problem is not whether man is blind or deaf and dumb but whether he's hard working because money has always been the cause of many broken homes in our society. Most of the failed marriages in our society today would have survived if the people involve both earn well in their various businesses or jobs but physically challenged.

The story is even worse when it is the man that earns less or nothing at all because the man is supposed to be the head of the home even when it comes to finance. So I don't see anything wrong in marrying a blind man who can take good care of me. Marriage is certified by God and not what the eyes can see.

If the spinal chord is okay
— Segun Johnson, Businessman

As long as the disability does not have anything to do with spinal cord injury, whether she's lame or blind but can still carry out her duty as my wife, I'll marry her. I mentioned spinal cord because that one may not allow her to satisfy me in bed and it will be useless for me to say I'm married and still look for another woman to fill that lagoon. True love is beyond what we can imagine that is why we may not really be able to predict who we marry.