THE SOCIAL AND ECONOMIC GAINS OF THE NIGER DELTA AMNESTY PROGRAMME 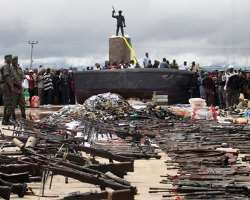 I was a little indifferent when the amnesty offer was made to repentant militants for three reasons. First I thought it will be grossly mismanaged like most other laudable initiatives with good outlays but with poor implementation. Secondly, I thought it was like treating the symptom of a disease without treating the disease itself. I said this because I know most of the reasons why our youths took up arms are still existent and if you get the current militants to cooperate with you, another crop will emerge naturally. And lastly, I felt it was a disservice to those who stuck to peaceful agitations. However, in recent times, following the success and vibrancy in the Niger Delta Amnesty Programme as orchestrated by the new leadership, one cannot help but commend them.


It would be worth the while to review how all this started. In 2009, the then President, late President Umaru Musa Yar’adua made a tough decision by granting amnesty and unconditional pardon to repentant militants of the Niger Delta region. It was a tough decision because it was a gamble of some sort. There was a lot of skepticism if the militants will ever cooperate. There were also those who felt that it was a way of indirectly giving incentives for violent agitation. For example, the Ogonis through MOSOP in the early 90s embarked on a non-violent agitation for the same reasons. The result was that a whole generation of their leaders were killed in the process by the then military government. No amnesty was given, no compensation, and no apologies were made. In fact as we speak, despite the general public consensus that the likes of Ken Saro-Wiwa were unjustly executed by the military junta, he still carries a criminal tag – no official reversal of his sentence at least for him to have a decent memory that he truly deserves. Before his death, he (Saro-Wiwa) was quoted to have said: “You can kill the messenger, but you cannot kill the message”. As predicted, the messenger was killed but the message survived and located the youths; the youths picked it up but armed with the experiences of their fallen leaders, they changed the strategy of the struggle and armed themselves. They had to be heard, they picked up arms and they were heard.


Oil installations were blown up, expatriate oil personnel were kidnapped and exchanged for ransom, and oil bunkering became the order of the day. In economic terms, the nation lost so much within this period. Although the exact amount of oil lost per day is not known, the United States Institute of Peace in a Special Report titled: "Blood Oil in the Niger Delta", estimated the value of Nigeria's stolen and shut-in oil production between 2003 and 2008 as: 2003 - $6.9 billion, 2004 - $6.4 billion, 2005 - $8.8 billion, 2006 - $17.0 billion, 2007 - $19.2 billion, 2008 - $33.8 billion. It is noteworthy to mention that this is only a rough estimate since there are no reliable statistics that distinguish between stolen, shut-in production and that due to forged bills of lading. About the economic loss as a result of the militancy in the Niger Delta region, the African Economic Outlook stated in their report on Nigeria that: “In the oil sector, the previous five years had been characterized by declining output, due largely to militant activities and the accompanying disruption of oil-producing activities. Before militants began attacks and destruction of oil facilities in 2005, Nigeria had been producing about 2.5 million barrels per day (bpd). By 2008, output had been reduced by about 40% to 1.5 million barrels per day”. If you multiply this by the prevailing price per barrel within this period then you’ll appreciate the quantum of loss suffered by the Nigerian economy per day.


In socio-economic terms, the people of the region suffered immensely as a result of the militant agitations. The region witnessed diminishing economic activities as a result of the militancy. Companies relocated out of the region for fear of kidnap of their expatriate workers. The people lived in fear. At some point, as a result of the insecurity, there was a dusk to dawn curfew in Port Harcourt, thus crippling the night life and associated economic activities. Lots of youths got swept away by the wave of violence – blood everywhere. I once read an article that chronicled the militant struggle in the Niger Delta region and I could recognize some of the names of the militants listed as casualties. A few of them were my seniors in secondary school and no one ever thought they’ll grow up to become militants. They were normal students with hopes and aspirations. For most of them, the society had failed them.


In an attempt to address this ugly situation, the Yar’adua administration announced an amnesty programme for the repentant militants. From hindsight, the results have showed that it was a good decision. The gains have been instant and obvious. On the economic gains of the amnesty programme, the African Economic Outlook stated in their 2011 report on Nigeria that: “Production appeared to stop declining in 2009, however, following the federal government’s amnesty programme, which brought relative peace to the Niger Delta area. By the end of 2009, petroleum production had increased to more than 2 million bpd, an output level that was maintained in 2010. Oil GDP, comprising crude petroleum and natural gas, grew by 3.9% in 2010. At the same time, oil production remained the dominant activity for export and government revenues. According to government records, in 2010 oil and gas accounted for about 96% of total export receipts and nearly 66% of total government revenues”. If you are friendly with figures, you can see the enormous gains to the economy.


However, one must state that after the disarmament process, the pace of implementation was a little slow at some point until recently, with the new leadership of Hon. Kingsley Kuku. Although I have never met or interacted with him before, if what I read in the papers is true, then he must be doing a good job. Since the opening of the demobilization camp in Obubra, Cross Rivers State, about 20,192 ex-militants from the 9 Niger Delta States have been successfully demobilized. In May 2011, it was reported that over 600 ex-militants are currently undergoing degree and vocational training courses in Ghana, Malaysia, Russia, South Africa and the United States. As at today, more that 5,000 Niger Delta youths are being processed for various forms of training both offshore and locally. Several of them have already graduated as Pilots, Sub-sea Welders, Divers, Crane Operators, etc. To think that these are mostly youths who about 2 years ago, the society had given up hope on, but now have their life back on track, is highly commendable. No doubt, the social gains have been enormous.


While I applaud the government on the gains of the amnesty programme, there are however issues that must not be swept aside. One recurring issue is the fact that those who chose to approach the struggle from the non-violent angle are still left unattended to in their helpless state. Their situation is fast deteriorating. Take a trip round Ogoni and you’ll see what I’m talking about. Vibrant youths with no employment, they can’t even farm or fish again because their land and rivers are heavily polluted. The UNEP Report recently published has already exposed this so I will not dwell on it. This may be outside of the purview of the Amnesty Programme since they were not largely militants, but the federal government must address the plight of the peaceful people of Ogoni and other peaceful Nigerians who chose to be law abiding in the wake of all the injustices. That they chose megaphones and pens as tools in their agitation does not mean they are fools. They had the choice to be violent, but they chose to be peaceful and so should be commended, not jettisoned.


Another issue is that we cannot continue to send our youths outside of the country for basic training. It’s simply not sustainable and not economically expedient. The federal Government should look at ways they can partner with the organized private sector to build vocational training centers in all the senatorial districts of the Niger Delta region. This is a more permanent solution as it will outlive the Niger Delta Amnesty Programme which is supposed to end in 2015. Through these vocational Training Centers, we can get more youths off the street by providing them with requisite skills set needed in today’s sophisticated world.


Lastly, I have been worried by the fear of what will become of the trainees when they complete the programme, especially with the prevalent high unemployment rate. Although I have been impressed by recent information I read in the papers (such as the Pilot Trainee in South Africa who was offered automatic employment and the 170 trainees who were given 3-year work permit in the UAE), much still needs to be done. The leadership of the Amnesty Programme needs to evolve unique business models that can support group ownership of small firms with supervision from expert consultants. For example, assuming they are sending trainees in Dredge Operation and Maintenance, at the end of their training, the amnesty office can partner with a private investor to procure one dredger for about 30 trainees who will all be both workers and co-owners of the dredger. Ownership will be completely transferred to them when they must have proved their mettle by paying back a certain percentage of the proceeds made within a specified period, covering the value of the dredger. As imperfect as this might sound, schemes like this can be evolved and uniquely customized to ensure that trainees get employed upon return.

But most importantly, government must address the very thing that started it all. Fiscal federalism and Resource Control might just be the first step.