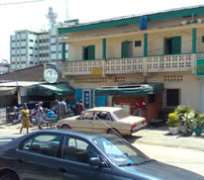 • Pension Souvenir, Cotonou
Benin Republic shook off its socialist garb and took on a capitalist economy 20 years ago. Coincidentally, Benin Republic, Nigeria's immediate neighbour to the west, also embraced democracy about the same time; following the easing out of then pro-Marxist military ruler Mathieu Kerekou.

Ever since, dozens of hotels have sprouted across Cotonou, Benin Republic's economic capital. Novotel, Hotel Alex, Hotel Vertigo, and Hotel Rivoli are among the elite league lodges that now dot the Cotonou landscape. Vertigo and Rivoli stand in close proximity along Avenue Steinmetz, which borders the neighbourhoods of Attikanmey and Guinkomey; while Hotel Alex stands near the popular Jonquet Motor Park (Gare Routiere Jonquet).

As is the situation in every city, the cost of staying at some of Cotonou's big-league hotels could be prohibitive. At Hotel Rivoli, for example, the rate for a night's stay begins at CFA 30,000 (roughly N10,000). At some of the other hotels, the rates are even much higher.

However, Cotonou also boasts a thousand-and-one lodges for the tourist running on a shoe-string budget. If you are looking for a place where the equivalent of barely N2,000 (CFA 5,500) can get you a room with bed, desk and chair, fan as well as toilet/bathroom en suite, then turn to Pension Souvenir. Pension Souvenir stands at house Number 38, Rue des Cheminots.

In English, Rue des Cheminots could pass for Iron Avenue; and, this epithet derives from the history of the neighbourhood. Decades ago, a rail-track ran through these parts and a dump for metallic scrap stood somewhere near the local train station. As time went by, Jonquet, a sort of junkyard, an allusion to the metallic scrap dump, would be foisted as name on the surrounding areas.

Owing to the overwhelming popularity of Jonquet, which boasts numerous roadside foreign currency exchangers, cafes, bars/restaurants, hotels, and brothels around the motor park; few inhabitants bother to memorise the names of the surrounding streets. This is the reason, for example, why most Cotonou residents do not know the name Rue des Cheminots, even though an uncountable number of them walk through the same street daily.

After some two decades visiting Cotonou frequently, either to spend the weekend or to pass the night on my way to other West African countries, I have come to realise that the easiest way to describe Pension Souvenir to anyone, including riders of Zemidjan, Beninoise equivalent of the Nigerian Okada; is to use Bar la Gaite. La Gaite is one of Cotonou's most popular drinking spots because their drinks, which come from two powerful refrigerators inside a supermarket on the building's ground floor; are always chilled.

Often, many of the drinkers are shoppers that came to the mart to buy stuffs, and choose to take a few sips after shopping.

Also, the bar's streets corner location offers its guests a good view of passersby and the traffic, and the presence of two cyber cafes, Cyber ka and Cyber Jonquet, nearby must contribute to making this neighbourhood more attractive. Another factor is the presence of vendors who sell barbeque chicken, beef, mutton as well as snail garnished with tomato and pepper sauce.

Mr. Olivier Monteiro is proprietor of Pension Souvenir. This year, 2011 marks 30 years since Mr. Monteiro made his first journey to Calabar, capital of Cross River State. Today, 30 years later, the memory of that 1981 trip remains fresh in his mind. Interestingly, the Cameroonian port settlement of Victoria (then known as Beua) was Olivier Monteiro's destination. He was heading to Cameroon to see a relation. And, his host in Cameroon was going to give him money for return fare. So, based on tales by supposed frequent commuters between Cotonou and Cameroon, Olivier had set out from Benin Republic with what he believed was enough fare to take him to his destination.

He had been told to travel from Cotonou to Lagos by road. In Lagos, he would board a Calabar-bound bus. From Calabar, he was supposed to sail to Oron and then board an ocean-liner to Victoria. But, by the time Monteiro got to Calabar, he was practically stranded. Ten (10) kobo, all the money he had on him, could not pay for his boat ride from Calabar to Oron, let alone the hours-long sail across the Atlantic Ocean to Cameroon.

Stranded in a strange land, Monteiro was presumably shaken. But, counting on his faith in God, he quickly shook off the gloom. Young and physically fit, Olivier was willing to work, even as a menial labourer, to raise money to continue his journey. However, since hunger was already gnawing at his tummy, it was now a matter of first things, first.

With his last dime, Olivier bought 10 kobo worth of banana. After ingesting his miserly breakfast, Olivier headed to the nearest church, Sacred Heart Cathedral on Egerton Street, Calabar; to pray. He actually walked into a Mass and followed that worship session to the end. After the church service, Olivier walked up to a young man and narrated his plight: He was stranded, but was willing to work, even to prune the surrounding lawns, for some money to enable him continue his journey.

The young man Olivier sought help from was one Christopher. Today, Olivier has a fair comprehension of the English language and even gets by when it comes to speaking the tongue. But, in 1981, he probably couldn't express himself in Her Majesty Queen Elisabeth II's language. So, Olivier had sought help speaking French.

Out of place as French language might have seemed to Olivier, it struck a cord with his newfound acquaintance, Christopher, who; having visited Francophone Cameroon settlements at some point in his life was happy to find an opportunity to exercise his knowledge of Charles de Gaulle's tongue.

At the time, Christopher was a student at the University of Calabar; and, probably hailing from a humble background, had to work to pay his way through college. Being a part-time teacher in a local vocational institute, Nico Vocational and Commercial School, Christopher's income was barely enough to take care of his undergraduate bills, yet he also had to feed himself from the meager wages. Not surprisingly, Christopher didn't have any money to spare. Nonetheless, he was willing to help and offered to take his newfound friend to the cleric in charge of Sacred Heart Cathedral.

After narrating Olivier's predicament and the stranded commuter's readiness to cut grass or work at a construction site, if necessary, to raise fare to continue his journey, the priest had said the church had a gardener to tend its lawns and knew no construction project to refer Olivier to. But, the Catholic clergy had not sent Olivier away empty-handed: 'He gave me five naira (N5)', Olivier recalled.

Continuing, Olivier added; 'Five naira was some good money those days, but it was not enough to pay my way to Cameroon. At this point, Christopher, my friend, offered to take me to his home. When we got to his residence, a room-and-parlour affair, Christopher said I could stay with him until he could think up a solution to my problem'.

As a student-cum-worker, Christopher was busy throughout every working weekday, Monday to Friday. So, he devoted Saturday to preparing soups and other items for meals to last him the next Monday to Friday.

Olivier again: 'The following day, a Monday morning, Christopher showed me where all the week's food were stored and told me to help myself to whatever I wanted to eat, whenever I was hungry. He then left me all alone in his home and went to work.

'Christopher's action, to me, was a rare expression of faith. I was surprised that a Nigerian could be so trusting as to leave his home to a complete stranger. So, that Monday, I was alone at Christopher's home. Since I had nothing to do, I made myself busy by cleaning up the house. Then, when Christopher returned, we ate supper together. While supping, Christopher told me he was willing to help me continue my journey, but I would have to be patient till the end of the month, after his next salary was paid.

'Through our dialogue, I discovered, even though Christopher never said so himself; that he didn't have enough money to take him to the end of the month.

At this point, I realised that my host had a problem, too. So, I offered him the N5 the bishop gave me to tide him over. Christopher would not take the money, but I insisted: we were like brothers, now; I told him. He eventually took the money.

Since month-end was still weeks away, Olivier ended up staying for more than 21 days with Christopher. That over three-week period gave the stranded traveller enough opportunity to assess his host.

Hear Olivier: 'I got to know his girlfriend because she visited from time to time. I remember she was a very pretty lady. Every time she visited, I had to give them privacy; so, I would leave the flat and go for a walk. This walk helped me to really appreciate how beautiful and peaceful Calabar was'.

Finally, in second week of April 1981, came the hard moment of their separation. Christopher was paid his current salary, and in line with his earlier promise; offered to take Olivier to Oron, where the latter would board a Cameroon-bound ferry.

'Christopher sailed with me to Oron from Calabar. And, I remember very well that after paying my fare, which was N20; he gave me another N10 for pocket money. In 1981, N1 was a lot of money; so, you can imagine how much N30 could buy. Christopher then wrote his postal address on a piece of paper for me and said he was looking forward to reading from me to confirm that I arrived safely.

'Those days, I used to wear a gold chain around my neck permanently. It was a present from my grandmother and I took this chain off and gave it to Christopher as souvenir and almost overwhelmed by emotion, I proceeded to board the ship to Cameroon.

'Due to the ocean waves, the journey to Cameroon was a stomach-churning one. After many hours of turbulent sail, we finally berthed at Douala. As I disembarked from the vessel, I thought of my friend Christopher and reached into my pocket for the paper, where Christopher wrote his address for me. It was at this point I realised the paper was missing. One month later, I clocked 21 years old'.

Well, a lost piece of paper caused the breakdown in communication. But, whatever Olivier wanted to say 30 years ago; but could not because he lost his friend's contact; he found the opportunity to lay bare during his encounter with Travels.

Olivier's eyes turned misty as he rounded off his narrative. One might not be wrong to imagine that on that day in early April, 30 years ago, Christopher's eyes were also watery as his newfound brother walked up the gangway into an ocean-going vessel that would take him to Cameroon.

'I was very young then, but today, 30 years later, I cannot forget Christopher. So, I pray that wherever he is, may God bless him and his family. This is my prayer for Christopher', Olivier concluded.