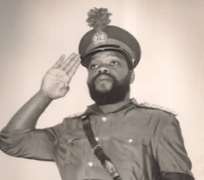 On Monday November 28, we began serializing the Ahiara Declaration, the principles of the Biafran revolution by late Dim Chukwuemeka-Odumegwu Ojukwu. Today we continue with the third part.

Self-Determination
The right to self-determination was good for the Greeks in 1822, for the Belgians in 1830, and for the Central and Eastern Europeans and the Irish at the end of the First World War. Yet it is not good for Biafrans because we are black. When blacks claim that right, they are warned against dangers trumped up by the imperialists-'fragmentation' and 'Balkanization', as if the trouble with the Balkans is the result of the application of the principle of self-determination.

Were the Balkans a healthier place before they emerged from the ruins of the Ottoman Empire? Those who sustained the Ottoman Empire considered it a European necessity, for its Eastern European provinces stood as a buffer between two ambitious and mutually antagonistic empires – the Russian and the Austrian. For the peace and repose of Europe, it therefore became a major concern of European statesmen to preserve the integrity of that empire. But when it was discovered that Ottoman rule was not only corrupt, oppressive and unprogressive, but also stubbornly irreformable, the happiness and well-being of its white populations came to be considered paramount. So by 1918 the integrity of that ancient and sprawling empire had been sacrificed to the well-being of the Eastern Europeans. Fellow Biafrans, that was in the white world.

But what do we find here in Negro Africa? The Federation of Nigeria is today as corrupt, as unprogressive and as oppressive and irreformable as the Ottoman Empire was in Eastern Europe over a century ago. And in contrast, the Nigerian Federation in the form it was constituted by the British cannot by any stretch of imagination be considered an African necessity. Yet we are being forced to sacrifice our very existence as a people to the integrity of that ramshackle creation that has no justification either in history or in the freely expressed wishes of the people. What other reason for this can there be than the fact that we are black?

In 1966, 50,000 Biafrans – men, women and children – were massacred in cold blood in Nigeria. Since July 6, 1967, hundreds of Biafrans have been killed daily by shelling, bombing, strafing and starvation advised, organised and supervised by Anglo-Saxon Britain. None of these atrocities has raised enough stir in many European capitals. But on the few occasions when a single white man died in Africa, even where he was a convicted bandit like the notorious case in the Congo, all the diplomatic chanceries of the world have been astir.; the whole world has been shaken to its very foundations by the din of protest against the alleged atrocity and by the clamour for vengeance. This was the case when the Nigerian vandals turned their British-supplied rifles on white Red Cross workers in Okigwe. Recently this has been the case with the reported disappearance of some white oil technicians in the Republic of Benin. But when we are massacred in thousands, nobody cares, because we are black.

Fellow countrymen and women, the fact is that in spite of their open protestations to the contrary, the white peoples of the world are still far from accepting that what is good for them can also be good for blacks. The day they make this basic concession that day will the non-Anglo-Saxon nations tell Britain to her face that she is guilty of genocide against us; that day will they call a halt to this monstrous war.

Beyond the confines of his state, he must accept regional and continental organisations which provide a front for the manipulation of the imperialist powers; organisations which are therefore unable to respond to African problems in a truly African manner. For Africans to show a true independence is to ask for anathemization and total liquidation.

Arab-Muslim Expansionism
The Biafran struggle is, on another plane, a resistance to the Arab-Muslim expansionism which has menaced and ravaged the African continent for twelve centuries. As early as the first quarter of the seventh century, the Arabs, a people from the Near-East, evolved Islam not just as a religion but as a cover for their insatiable territorial ambitions. By the tenth century they had overrun and occupied, among other places, Egypt and North Africa. Had they stopped there, we would not today be faced with the wicked and unholy collusion we are fighting against. On the contrary, they cast their hungry and envious eyes across the Sahara on to the land of the Negroes.

Our Biafran ancestors remained immune from the Islamic contagion. From the middle years of the last century Christianity was established in our land. In this way we came to be a predominantly Christian people. We came to stand out as a non-Muslim island in a raging Islamic sea. Throughout the period of the ill-fated Nigerian experiment, the Muslims hoped to infiltrate Biafra by peaceful means and quiet propaganda, but failed. Then the late Ahmadu Bello, the Sarduana of Sokoto tried, by political and economic blackmail and terrorism, to convert Biafrans settled in Northern Nigeria to Islam. His hope was that these Biafrans on dispersion would then carry Islam to Biafra, and by so doing give the religion political control of the area. The crises which agitated the so-called independent Nigeria from 1962 gave these aggressive proselytisers the chance to try converting us by force.

It is now evident why the fanatic Arab-Muslim states like Algeria, Egypt and the Sudan have come out openly and massively to support and aid Nigeria in her present war of genocide against us. These states see militant Arabism as a powerful instrument for attaining power in the world.

Biafra is one of the few African states untainted by Islam. Therefore, to militant Arabism, Biafra is a stumbling block to their plan for controlling the whole continent. This control is fast becoming manifest in the Organisation of African Unity. On the question of the Middle East, the Sudanese crisis, in the war between Nigeria and Biafra, militant Arabism has succeeded in imposing its point of view through blackmail and bluster.

It has threatened African leaders and governments with inciting their Muslim minorities to rebellion if the governments adopted an independent line on these questions. In this way an O.A.U that has not felt itself able to discuss the genocide in the Sudan and Biafra, an O.A.U. that has again and again advertised its ineptitude as a peace-maker, has rushed into open condemnation of Israel over the Middle East dispute. Indeed in recent times, by its performance, the O.A.U. might well be an Organisation of Arab Unity.

Africa Exploited
Our struggle, in an even more fundamental sense, is the culmination of the confrontation between Negro nationalism and white imperialism. It is a movement designed to ensure the realization of man's full stature in Africa.

Ever since the 15th century, the European world has treated the African continent as a field for exploitation. Their policies in Africa have for so long been determined to a very great extent by their greed for economic gain. For over three and half centuries, it suited them to transport and transplant millions of the flower of our manhood for the purpose of exploiting the Americas and the West Indies. They did so with no uneasiness of conscience. They justified this trade in men by reference to biblical passages violently torn out of context.

When it became no longer profitable to them to continue with the depopulation and uncontrolled spoilation of Negro Africa, their need of the moment became to exploit the natural resources of the continent, using Negro labour. In response to this need they evolved their informal empire in the 19th century under which they controlled and exploited Negro Africa through their missionaries and monopolist mercantile companies. As time went on they discarded the empire of informal sway as unsatisfactory and established the direct empire as the most effective means of exploiting our homeland. It was at this stage that with cynical imperturbability they carved up the African continent, and boxed up the native populations in artificial states designed purely to minister to white economic interests.

This brutal and unprecedented rape of a whole continent was a violent challenge to Negro self-respect. Not surprisingly, within half a century the theory and practice of empire ran into stiff opposition from Negro nationalism. In the face of the movement for Negro freedom the white imperialists changed tactics. They decided to install puppet African administrations to create the illusion of political independence, while retaining the control of the economy. And this they quickly did between 1957 and 1965. The direct empire was transformed into an indirect empire, that regime of fraud and exploitation which African nationalists aptly describe as Neo-Colonialism.