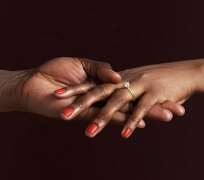 I had gone to a nearby super market to get some provisions for the house when a cute little girl bumped into me. “O sorry madam. She could be naughty some times,” the man apologised. “It's alright. Children love to run around in places like this. So, please let her be. Your daughter is beautiful,” I said. “She is actually my niece. By the way, my name is Richmond,” he said.

I also introduced myself as Phina. That was how Richmond and I met for the first time. The next time I saw Richmond again was two months after at a friend's baby naming ceremony. In fact, I could not recognise him until he called my name. “Hello Phina, how are you?” I heard a baritone voice behind me. I knew I had heard the voice before, and as I turned, I saw Richmond. We exchanged pleasantries and then, phone numbers. From text messages to phone calls, then, one date to another and after four months of friendship, he informed me that his younger sister was going to mark her birthday that weekend and that he wanted me to be there.

Sweetheart, Selina would be marking her birthday this weekend, please you have to be there,” he pleaded.

“How can I miss my friend's birthday? I will surely be there,” I promised. I got to the venue of the birthday early to ensure that everything went well as planned. From the first day I met his family, it was obvious that they all liked and accepted me. I feel comfortable whenever I am among them.

They are such a loving and caring family. They watch out for each other. When the birthday party was in full swing, Richmond took to the centre, clicking on the wine of glass he was carrying and said, “It is time to make a toast for my dear sister who is a year older today.” After the toast, he announced that there was an important assignment he must perform. He called me to join him, went down on his ring, brought out a diamond ring and said, Phina, please be my wife and the mother of my children.” I was stunned and all eyes were on us.
I did not expect this Richmond but yes, I will be your wife and the mother of your children, I told him. He slipped the ring into my finger and gave me a long kiss. Immediately, guests started clapping, and this made me shy at the same time excited. One Friday evening, about two months after our engagement, I went to his house, knocked and a lady opened the door for me.

“Yes, who are you looking for?” she asked. “I want to see Richmond. Is he in? I asked. She told me he was not at home. “Tell him Phina checked on him when he comes back,” I said and left immediately. I was surprised to see another woman in his house because he lives alone. She was dressed in seductive clothes. “Who could she be? I know all his sisters, so who is she?” I asked myself. I was a bit angry but had to calm down so that I don't jump into hasty conclusions. I called to find out where he was and he told me on his way home
I pleaded with him to come over to my house which he agreed to. Incidentally, we got there almost at the same time. I told him I went to his apartment and a lady opened the door. He should please tell me what I don't know. “She is my ex-girlfriend, Whitney. She still has the spare key to my apartment. I have not seen her since we broke up. I don't even know she is around,” he explained. “Well, since you now know, please collect the key from her,” I pleaded. He pleaded with me not to get angry and promised to collect it from her.

The next time I asked him, he told me she refused to give him the spare key emphasizing that they have not broken up; they only had a misunderstanding like every other couple. I suggested that he changed the front door lock but he told me it was not necessary. I have been to his house about five times and met her in his absence exhibiting the attitude of “I am the owner of this house”. I am not comfortable at all with this so I informed his family.

His mother ordered him to either collect his key from Whitney or change the lock but he still has not done any of that. It got to a point that whenever I bring up the topic, Richmond flares up and we end up quarrelling. “Richmond is there something you are not telling me? Who is Whitney to you?” I asked. “As I told you earlier, she is my ex-girlfriend and nothing more.”

I cannot force her to give me the key. Whenever she is ready to hand over the key to me, she will,” he emphasized. “Is that what you are telling me? How can I wear your engagement ring and another woman has the spare key to your house? I am very sure there is something you are not telling me,” I retorted. Our wedding is getting closer and right now I don't know if I should still continue with the wedding plan.
From all indications, something must still be going on between them which Richmond is not willing to tell anybody.

Do you think the ring is enough insurance for me or should I quietly take a walk?

How do I explain the fact that I am wearing his engagement ring while his ex-girlfriend still has the spare key to his house?

Who has more rights as it is?