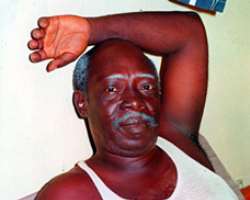 The name Oluwa Kayode Olaseyinde rings a bell. Viewers of Papa Ajasco of Wale Adenuga Productions (WAP) would not forget him in haste. He is the humorous actor popularly known as Pa James.

Olaseyinde, who hails from Kpatakwu, in Ifelodu Local Government Area of Kwara State, was born and bred in Lagos. He came from a family of six and he is the first child.

Speaking to nfc, Pa Olaseyinde revealed how he got into the entertainment industry, even as a school drop-out and untrained actor.

Childhood
After my primary school in Lagos, I went to Kwara to continue my secondary school, but I could not complete it because I was selling to pay my fees and at a time I stopped entirely to come back to Lagos. During Festac 77, I was selling handkerchiefs, lighter and anything I could lay my hands upon. Later I went to one my brothers and I assisted him in selling cement. I hadn't the opportunity of going to school, but I thank God today. Later, I left my brother and went back to the street at Yaba, where I mixed with Igbo boys and I started selling pants.

“After sometime, I got a job at Structure Company at Apapa where I worked as a laborer. It was a tedious and taskful job but what could I do? One day, one man saw the way I worked and how tired I was and called me. He told me that that job was too strenuous for me as a young boy and he promised to help me. What he did was to get me a job in UTC Hardware as a labourer too, but this time with a lesser task. This was what I was doing until I got into acting.”

First contact with acting
His role in the award-winning Papa Ajasco is that of an illiterate, but one would not stop thinking how he got into acting in the first place. He said: “I was going home one day after work and I met a friend of mine who was an artiste. He asked if I would want to join their theatre group and I said yes without thinking twice. He told me he was going for rehearsal and I went with him. On getting there, he took me to the late Oraliwaju Ali of Ali Love Theatre Group. When they started rehearsing for a programme they had, the man, who was taking the role of a security man could not do it well and at a point, the producer got angry and said he was going to cancel the programme.

“From where I sat, I was watching. I told my friend I could do it and immediately, he told Ali that I said I could do it. He gave me the opportunity. I shivered. All the same, I came to try and when I did it the first time, they all clapped and that was how I joined the group.

“Nobody inspired me to go into acting. It was a natural endowment. When I was in primary school, my teachers who were always laughing whenever I did anything loved me. Sometimes they would give me food and when I would be eating, they would be laughing. I kept asking myself why they would be laughing at everything I did. My family, on the other hand, never supported me. They saw me as a lazy man who did not want to be useful in life because then, they would always refer to my mates who were mechanics and the rest. I had to run away from home to enable me to concentrate on what I was doing. People tried to dissuade me, but I was determined to continue, knowing it was where my destiny lied.

On his first experience, he laughed and said it was not easy as he fidgeted when it was his turn to perform. “When I saw the crowd, fear gripped me. I became so unsure of myself that I felt like running away, but at a point I regained my confidence. When I got to the stage, the first thing I said made the to laugh and clapped and that helped me. It was not easy but I performed very well.”.

View on Wale Adenuga
It is true that I have acted so many dramas, but the one that gives me joy is Papa Ajasco. I thank God for connecting me to Wale Adenuga. I joined them from inception, but that is not the point. He is one in a million. He is a man of integrity who would never owe you after production, a man who would always want to know why you are sad whenever you appear so. He is one man who has changed my life completely. I always pray that he will not die at least not now. He has really done great things for me. That is why you don't see me in other programmes; not that it was an agreement but he has spoilt me. When people come to give me roles the first question they ask is can we pay you? Eventually they would go because they won't be able to pay me.”

Achievements
I am proud and happy to tell you that through Wale Adenuga Productions (WAP), I have built a house, bought a car and other things I take care of. I live comfortably as a married man with children. One promise I made is to give my children quality education and I thank God they are doing well. My son, Samuel Oraseyinde, won The Ama Award in the Best Kiddy Award in the year 2000.”

Role in Papa Ajasco
In the entertainment industry, solder comes and goes. I also trust Wale Adenuga, because I know he will always get someone to play the role he wants. Being an expert in the industry, he knows what to do. When there was a change, was the programme not going on? Even though people would say no this person cannot do something, it does not matter. If I leave today, you will be surprised to find out that there are people who can do it even better than I. All they need is just an opportunity. On the other hand, I was not changed because I was not involved in what happened then. I always consider the consequences of things before I embark on it and what matters in life is the ability of a man to keep his integrity. Let's not sell our conscience because of money.”

Fatherly advice
Advising the youths, especially those who desire to go into entertainment he said they should go to school. “As I am seeing the entertainment industry, it is not the way it was when we started. Anyone who did not go to school cannot make it in the industry. I even told my children that if by any reason, any of them decides not to go to school I will disown him or her. It is true that I did not go and I am doing well but it will not be so with this generation. Most importantly, do not allow money to be the first priority. Some will tell me 'Pa James I want to join you people, how much will they pay me.' Let the society know that you have something to offer first, then, money will follow. If you are money conscious, you cannot go far in life.