Marriage Has Made Me Focused –Oge Okoye 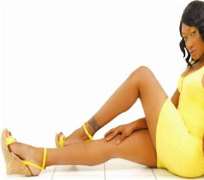 Actress, Oge Okoye-Duru, has been dazzling Nollywood viewers in the last 10 years and she has featured in over 40 movies.

Oge, who is happily married to a Holland-based businessman, is often seen as one of Nollywood's bad girls as a result of some of her movie roles. However, the good-looking actress has another view to the general perception of fans and viewers.

“It's just make-believe. It's a script that is acted out and there's nothing attached to it. So, it doesn't have anything to do with my roles. Because anytime I'm acting, it's a different Oge. That is not me. Whatever I'm doing is just the character. But if I'm out there, I'm just your humble Oge.”

Speaking on one of her embarrassing moments even as a Nollywood star, the delectable Oge said: “Acting makes you restricted from hanging out in certain places. Some people watch my movies and believe that's the way I am. Maybe they watch a movie where I play a wicked role or something else, they just believe I'm wicked. I remember walking on the road one day and one old Yoruba woman was shouting, 'you, ashewo, husband snatcher' and I felt so embarrassed but people around tried to make her understand it was just acting and nothing more but she didn't believe it.”

An only child, who picked up her acting career from her days as a young girl, Oge stuck to her belief that she would one day become an actress and when she got her first role, she couldn't help but tell everybody that cared to listen.

“While I was in school, I was always going for auditions. Though it wasn't easy, I continued until I finally got a role one day. I was so happy I announced it to anybody who cared to listen. I was like, 'oh finally, I'm going to become an actress.'”

Oge believes that marriage has made her more focused than she would have been ordinarily. In her words, “marriage has made me more focused, made me to be able to manage my temper more than ever and it has given me a sense of responsibility because now I'm responsible to a lot of people. My husband, my baby and others. You know, men are like babies.”

Growing up for Oge was lonely as the only child but she got all she ever wanted even as her parents didn't spoil her so as to grow up and become as independent as she is at the moment.

“I was pampered as the only child. But I was not spoilt because my dad did not spare me whenever I did anything stupid. My mum was always particular about the way I conducted myself. Though I felt a bit lonely as a child but growing up was fun for me. I'm an only child and I'm this kind of a child whose parents would not allow going out and playing with other kids. I was kind of restricted to our home alone. But I sneaked out whenever my parents were not around to play with other kids in our neighbourhood. My parents restricted my movement to only going to school. And from there to bed. This, I also think helped me to be focused and independent. I grew up knowing what I really wanted out of life,” she recalled of her growing up days.

She started acting in 2001 and studied theatre arts at the Nnamdi Azikwe University and for Oge acting is a dream come true.

Hear her: “I always wanted to act even to the extent that I had to read theatre arts in school because that is just what I wanted to do. I have always wanted to see it come out a reality. It is like a dream come true. I went for auditions and, God so kind, I got a role, although not a lead role. The title of my first movie was Ceaser to Ceaser and my first lead job was a popular comedy by Nkem Owoh entitled Spanner. But the film that actually brought me to the fore is Sisiter Mary and I have done several movies since then.”