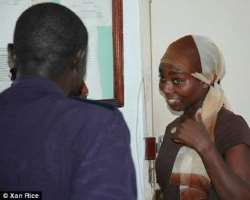 Lagos (THEWILL) - A Nigerian woman Kate Artori West, age 28 was on Tuesday convicted and sentenced to a life term in prison by a Banjul, Gambian court for the murder of her millionaire husband William West, in 2006.

The Charred remains of her 76-year-old husband entrepreneur, was found in a sack near their four bedroom holiday home in a Sanyang resort in The Gambia.

Kate had told local police that her late husband had disappeared while in Senegal on a daytrip from Sanyang in July 2006. She said he simply 'disappeared' after going into a corner store to buy cigarettes. She was arrested in The Gambia at the request of the British Police, interrogated and charged after she allegedly confessed to killing Mr. West with a wooden pestle used for pounding and then burning his remains. During another round of questioning, she recanted her two previous stories and said five Nigerian men took him from their sanyang home and killed him.

In court, she told the judge that her earlier confessions were forced out of her, as she was tortured with electric cables by The Gambian police.

Unconfirmed reports say the deceased was about to seek for a divorce before his murder. Kate stood to inherit millions of pounds and homes in Essex and Sanyang before her conviction.

The couple were said to have met in a bar in The Gambia in 2000, where William West had gone to holiday after the death of his former wife, Doris. They married later that year and moved to live together in his $1.2 million dollars home in St Helen's Park Road, Hastings, East Sussex, UK.

Officers of the British police travelled to the West African country to assist the local police in its investigation.

The West family lawyer released a statement after the court ruling saying, “ This has been a protracted and traumatic time for the West family. They (family) are pleased that justice has now been done and that Kate West has been brought to account for her crime.”

However, Kate plans to appeal this judgment. Her lawyer in a statement said, “She is gutted about being sent to prison for life, she pleaded not guilty to the charge on the grounds that she firmly believed she did not kill Mr. West. She did confess to the crime originally but we challenged that confession on the grounds that it wasn't obtained voluntarily.”

Kate, a farmers' daughter from southern Nigeria will serve her sentence in a prison outside Banjul.