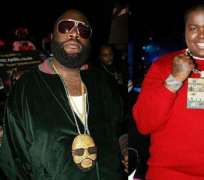 Fans of the famous Calabar Carnival will be thrilled this year as the organisers has gone a step further to make the tradition more exciting. Top American Rap artiste Rick Ross and Jamaican American singer Sean Kingston will grace the stage of this year edition to entertain their fans.

Sean Kingston is scheduled to perform at the U. J Esuene sports stadium on Reggae night December 16, while Rick Ross Rocks Calabar on the 28th of December alongside the likes of Psquare, Wizkid, Banky W, Ojb Jezreel, Stunts, and comedian Julius Agwu at U.J Esuene stadium.

Also to perform at the carnival is American Jazz, R&B, Soul and Funk group Kool and the Gang. They would be perfoming at the Governors masked fete on the 20th of December , at the Tinapa water parks dishing out their ever green old skool tunes like Get Down On It, Celebration and Joanna..

This year carnival promises to be bigger and better.