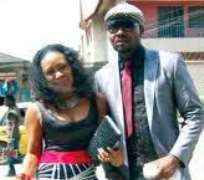 Afrotastic Diva, Muma Gee and her husband have announced a definite date for her wedding.

A traditional Wedding had been held since last year in Muma's hometown in Ahoada East LGA of Rivers State but the couple had delayed on the wedding due to their different professional commitments.

Congratulations to the family in advance!