'LOVE IS WHAT WE NEED' 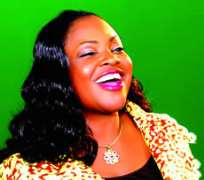 Funke Akinokun
Funke Akinokun is a beauty consultant and she has combined that with her singing skills. She sings the gospel. She started singing, by her testimony, from the age of 10 and in 2009; she released her first album, entitled His Praise. She has had the opportunity to sing both in Nigeria and the United States.

A mother of four boys, she is married to her soul-mate, Tayo Akinokun, whom she said, has been a great support in her successes - both in the beauty business and her singing career. Recently, she record a single, Love is What We Need. Speaking of the song during the video shoot at Planet Nollywood (De Rock Studio) Ikeja, Funke Akinokun said her vision for the song is to promote love all over the world. She believes that with love, the world would be a better place.

The desire to preach love to the world, gave her reason to record the single with 17 artistes. According to her, 'we recorded with over 50 Nigerian stars, which include radio and television presenters, Nollywood artistes and comedians. The all-star track is entitled Love is What we Need. I was able to achieve my vision with the assistance of my producer, Wole Oni, who also mixed, mastered, composed and wrote the song.

'Though it was very challenging bringing the stars together, especially during the shooting of the video because of their busy schedules, I thank God it was successful and I feel so fulfilled. The audio has been released but we intend to release the video immediately after the shooting. I am so grateful to my producer for making my dream a reality.'

A notable music producer, Wole Oni, commended the artiste and all the stars that featured in the video shoot. 'It is a good thing that we are doing something for the society and the world at large. Preaching love is what God demands from us because violence is inhuman. So, we should relate with one another in love and be our brother's keepers. This kind of song promotes unity and oneness in the entertainment industry, the media and among all and sundry. We are also using this as a medium to tell the government that, with love, the society would be a better place for all.'

Shan George also spoke on the song: 'It is a good time to talk about love and I give credit to the artist, Funke, for her creativity and beauty which she wants to share with everyone. She is a very good friend of the producer, Wole Oni, who invited me for the project. I must commend her efforts in bringing most of Nigerian stars to participate in the project. Through the song, we are only telling people that love is all we need.'