Two Brides and a Baby finally hits the big screen 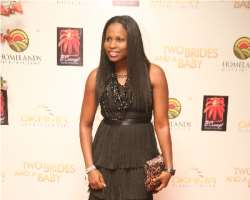 The wait is finally over as the most anticipated movie in recent times, Two Brides and a Baby gets to the cinemas.

After a very successful premiere at the Genesis de Luxe Cinema at the Palms, Lagos, the movie is now set to hit the screen in spectacular fashion in most of the cinemas nationwide. The movie which is presently getting 'thumbs up' from industry practitioners is now showing at cinemas on the Lagos and Abuja axis.

Two Brides and a Baby is presently showing at the Genesis cinemas in Lagos and at Silverbird cinema in the federal capital territory, Abuja. The movie which has already attracted the attention of movie lovers on the social networking platforms, twitter and facebook will enjoy three viewing slots daily at the cinemas listed above according to the producer's twitter account. It promises to hold the audience spellbound as there are no dull moments.

The movie which was shot at exclusive locations in Lagos boasts of a modest but impressive cast which parades the likes of the delectable screen goddess, Stella Damasus, the unassuming but firm, Kalu Ikeagwu, Blessing Egbe, Chelsea Eze, O.C. Ukeje, Okey Uzoeshi, Keira Hewatch and others.

On the successful premiere of the movie, she said '' I appreciate everyone that came for the premiere of this movie especially my colleagues who made sure I got the right support, the gentlemen of the press, fans and well wishers, I can't thank you enough. Now that the movie is at the cinemas, I hope you like it because it is a good one and I salute the cast of the movie for really making everything count''.

The movie centers on the story of Bankole (O.C Ukeje) and Keche (Chelsea Eze), a day to their wedding, Kole's ex girlfriend (Stella Damasus) suddenly shows up during their wedding rehearsals. Many events unfolded going into the day of the wedding.