The king of comedy, Ali Baba, succumbs to father's wish 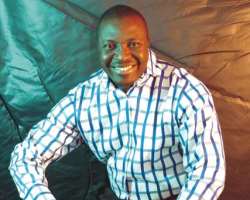 FOR elderly fans of the Nigerian King of Comedy, Ali Baba, who are aged 70 and above wishing to have him compere at their functions, they should better start booking the comedian for their birthday celebrations as his price has gone 50 per cent down. This is coming as a fulfillment he made to his father's request to cut down on his performance fee in order to afford the low in the society a chance to feel him. Chief Alfred Akpophiohwobo Akporobome , the OTOTA R'OVIE OF AGBARHA KINGDOM, UGHELLI, DELTA STATE , amiable father of the talented and creative King of Comedy, is happy that after five years , his son has yielded to his wish. Ali Baba told Trend'tainment that “ when my father turned 75 years four years ago , he told me specifically what he wanted as gift for his birthday was for me to give a 50 per cent discount on my fees for clients above 70 years,” he said but when asked why it took him four years to accede to his father's request , Ali replied “I was waiting for the 6000 mega watts promised by the Federal Government but on a more serious note, It should have started since August which was his birthday, but I was waiting for the Muslims to celebrates Sallah” he concluded .

Pa Akporobome will be 80 next year and upon asking his father recently what he would want for his 80th birthday , the old man responded “ the small discount I asked you to give , u no fit, it's the one that has not come you are planning for? Go Siddon.” That irked Ali Baba to place a discount on his fees.

“As an elder statesman who enjoys certain privileges because of his age that is why he asked me to reciprocate,” Ali Baba said but was quick to inform that conditions apply;

“It is only for birthdays, and booking is by first come first serve and subject to availability” he submitted.