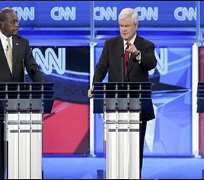 The Republican presidential hopefuls criticized U.S. policy toward Pakistan and called for placing sanctions on Iran's central bank in a lively and substantive foreign policy debate on Tuesday.

Newt Gingrich, a former House of Representatives speaker, gave a composed performance in the first debate since he surged to the top of polls. He backed an overhaul in immigration policy that would include a guest-worker program similar to plans condemned by conservatives in the past.

The debate, the second on foreign policy in the last 10 days, featured sharp exchanges on a broad range of issues, including anti-terrorism laws, Pakistan and Afghanistan.

The Republicans ganged up on Pakistan and questioned whether the United States could trust it. Texas Governor Rick Perry called Pakistan unworthy of U.S. aid because it had not done enough to help fight al Qaeda.

"To write a check to countries that are clearly not representing American interests is nonsensical," said Perry, who has faded in polls after recent debate stumbles but had a stronger performance on Tuesday.

Representative Michele Bachmann, a member of the House Intelligence Committee, called Perry "highly naive" and said the United States should demand more from a "violent and unstable" Pakistan with nuclear weapons.

She called it "a nation that lies, that does everything possible that you could imagine wrong. At the same time they do share intelligence data with us regarding al Qaeda."

Former Massachusetts Governor Mitt Romney said U.S. aid to Islamabad could help "bring Pakistan into the 21st century, or the 20th century for that matter."

The extensive criticism of Pakistan featured "nasty and provocative language," said Teresita Schaffer, a non-resident fellow at the Brookings Institution, but she said a Republican president probably would not change Pakistan policy much.

'COMPLICATED REALITY'
"I suspect that any plausible Republican would have to deal with the complicated reality in about the way the current administration is doing," Schaffer said.

Democrats have criticized the Republican field for a lack of foreign policy knowledge, but the wide-ranging debate was substantive and devoid of major missteps. Jon Huntsman, a former U.S. ambassador to China, is the only candidate with deep foreign policy experience.

In a discussion of ways to halt Iran's nuclear weapons program, Perry and Gingrich backed sanctions on the Iranian central bank. Gingrich called it "a good idea."

Eight Republicans participated in the debate at Washington's DAR Constitution Hall, which aired live on CNN and was the 11th for Republicans seeking the right to challenge President Barack Obama in 2012.

Gingrich, as the latest in a series of conservatives to challenge the more moderate Romney for the top spot in the Republican race, had the most to lose in the showdown.

A series of recent polls gave Gingrich an edge over Romney, who has hovered near the top of polls all year but failed to win over many conservatives. Gingrich's campaign has soared as rivals like businessman Herman Cain and Perry faltered in the spotlight.

But Gingrich could draw new criticism from conservatives with his support for an immigration overhaul with a guest worker program. If you are an immigrant with children who works, pays taxes and attends church, he said, "I don't think we're going to separate you from your family, uproot you forcefully and kick you out."

The candidates largely agreed on the need to strengthen domestic surveillance and anti-terrorism laws but several warned of the potential threat to civil liberties.

Gingrich said authorities should use "every tool that you can possibly use" to fight terrorism and endorsed strengthening the Patriot Act, the law passed after the September 11, 2001, attacks to expand police powers to battle terrorism.

But libertarian Representative Ron Paul said the law undermined personal liberties. "I would be very careful protecting the rule of law," he said.

Former Senator Rick Santorum said he would back the use of profiling to give heavier airport screenings to Muslims, because they are "the folks who are most likely to commit these crimes."

Cain refused to go that far, but called for "targeted identification" of passengers. He said profiling was "oversimplifying" the issue.

The debate, co-sponsored by conservative think tanks the Heritage Foundation and American Enterprise Institute, is the first presidential debate in Washington since a 1960 face-off between Democrat John Kennedy and Republican Richard Nixon that helped launch Kennedy's run to the White House.