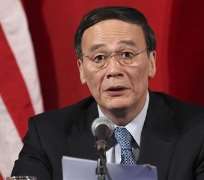 Chinese Vice-Premier Wang Qishan warned on Monday the global economy is in a grim state and the visiting U.S. commerce secretary said China would spend $1.7 trillion on strategic sectors as Beijing seeks to bolster waning growth.

Wang said an "unbalanced recovery" may be the best option to deal with what he had described on Saturday as a certain chronic global recession, suggesting Beijing would bolster its own economy before it worries about global imbalances at the heart of trade tensions with Washington.

"An unbalanced recovery would be better than a balanced recession," he said at the annual U.S.-China Joint Commission on Commerce and Trade, or JCCT, in the southwest Chinese city of Chengdu.

The comments, echoed by Vice Finance Minister Zhu Guangyao, stopped short of suggesting China would try to boost exports as it had done during the 2008-2009 global financial crisis when it pegged the yuan to the dollar.

Instead, U.S. Commerce Secretary John Bryson told reporters that China had confirmed to U.S. officials that it planned to spend $1.7 trillion on strategic sectors in the next five years.

Beijing has previously said these sectors include alternative energy, biotechnology and advanced equipment manufacturing, underlining its aim to shift the growth engine of the world's No.2 economy to cleaner and high-tech sectors.

The investment amount of 10 trillion yuan ($1.7 trillion) is more than two times bigger than the eye-popping 4 trillion yuan stimulus package launched during the global financial crisis, plans first reported by Reuters a year ago.

"Global economic conditions remain grim, and ensuring economic recovery is the overriding priority," said Wang, the top official steering China's financial and trade policy, at the start of the second day of talks with the Americans.

His comments suggested that Beijing should attend to bolstering China's own growth before it worried about global imbalances. In other words, a strong Chinese economy that brings a continued trade deficit with the United States would be better for the world economy than a slowdown in China itself.

"As major world economies, China and the United States would make a positive contribution to the world through their own steady development," Wang told dozens of trade, investment, energy and agricultural officials from each government seated in a conference hall.

Monday, Singapore and Thailand said their economies would shrink in the fourth quarter and Japan posted a bigger than expected fall in October exports. Some central banks, including those in Brazil and Indonesia, have cut interest rates.

On Saturday, Wang gave the most dire assessment on the world economy from a senior Chinese policymaker to date.

"The one thing that we can be certain of, among all the uncertainties, is that the global economic recession caused by the international financial crisis will be chronic," he was quoted as saying by the official Xinhua news agency.

The remarks weighed on Chinese and Hong Kong stocks, while world markets were also weak as investors fretted over the euro zone debt crisis.

After tightening monetary policy to fight the threat of inflation, the central bank has since loosened its grip on bank credit in a bid to support cash-starved small firms and pledged to fine-tune policy if needed as economic growth slowed down.

"It's clear now that Beijing is ready for policy fine-tuning (to support growth) at a time when the overall domestic and foreign economic situation is not optimistic," said Hua Zhongwei, an economist with Huachuang Securities in Beijing.

ON TRADE, FRICTION AND PROGRESS
U.S. officials said the discussions yielded progress on the question of forced technology transfers to Chinese companies, long a sore point for U.S. businesses, and on other trade irritants involving software, beef and cars.

In particular, China committed not to require foreign automakers to hand their new energy vehicle technology over to Chinese partners, or to establish Chinese brands as a condition for market access, said U.S. Trade Representative Ron Kirk.

"China also confirmed that foreign-invested companies will be eligible on an equal basis for any subsidies or incentive programs for electric vehicles," Kirk said, highlighting an issue that was a top concern for many U.S. lawmakers.

Robert Holleyman, president of the Business Software Alliance, said in Washington he was he was encouraged by a renewed Chinese commitment to ensure government agencies and state-owned companies are using only legal software.

"We are pleased that the State Council, China's chief governing body, has been put directly in charge. We need to see tangible results in the short term and long term, because the scale of piracy in China is enormous," Holleyman said.

Although the JCCT talks do not address exchange rate policies, U.S. officials at the talks warned Wang and his colleagues that they could not ignore rising American impatience with China's trade policies and investment barriers.

U.S. gripes about China's trade-boosting policies spilled into President Barack Obama's meeting with Chinese Premier Wen Jiabao on Saturday in Bali, when Obama raised China's exchange rate policies, which many in Washington say keep the yuan cheap against the dollar in order to help Chinese exports.

However, Zhong Wei, an influential economist at Beijing Normal University, said the benefits to the United States of yuan appreciation "are nearly zero."

"Cheap Chinese goods have been a subsidy for the poor in the U.S., and now the U.S. government wants to eliminate such subsidy while it's having difficulty creating jobs," he said.

"But a reality also is that many in the U.S., including the business community and the Congress, are moving toward a more negative view of our trading relationship, and they question whether the JCCT is able to make meaningful progress," said Bryson.