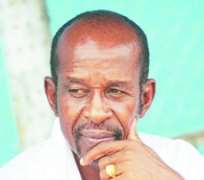 Enyimba Coach, Okey Emordi, has quit the Aba-based side, citing personal reasons for his decision. The experienced handler, who made a return to the Club in 2009, five years after he led the Aba club to successfully defend the CAF Champions League trophy the club first won in 2003, threw in the towel Monday in what many observers described as a shock decision.

According to him, he has to move on and has no problems with the management of the club or anyone as may be insinuated by the public. 'I disengaged myself from the services of Enyimba and the reasons for doing so are purely personal. I have no problem with anyone in Enyimba and my decision to disengage myself is to enable me take care of some personal issues that require my attention.'

Enyimba Chairman, Felix Anyansi Agwu, who confirmed Emordi's resignation to Daily Sunsports said it was no big deal, adding that the club is already in the process of replacing him.

'It's true that Emordi has quit his position with Enyimba but in football, it's no big deal. We're already working towards a replacement and as I speak with you, the club is undergoing restructuring. We're working towards making Enyimba the ideal club and we cannot allow the resignation of coach Emordi to trouble us.'

Emordi, who has also handled Bush Bucks in the Premier Soccer League in South Africa as well as Enugu Rangers, returned to the club in 2009 from his job as technical adviser to Heartland of Owerri.

He replaced Nigeria's former coach, Austin Eguavoen, whose one-year contract with the Aba Elephants was not renewed after he reportedly asked Enyimba for a three-month break to allow him attend a coaching course in Europe.