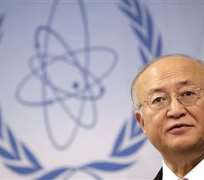 The U.N. nuclear watchdog board censured Iran on Friday over mounting suspicions it is trying to develop nuclear weapons, but Tehran said the move would only strengthen its determination to press on with sensitive work.

Almost unanimously, the agency's 35-nation board passed a resolution expressing "increasing concern" about Iran's nuclear program, after a U.N. report last week said the Islamic state appeared to have worked on designing an atom bomb.

In a further sign of Tehran's worsening ties with the U.N. body, he said Iran would boycott rare Middle East nuclear talks hosted by the IAEA next week.

In Washington, White House press secretary Jay Carney said the resolution exposed the "hollowness of Iran's claims" that its nuclear program is purely peaceful. The United States would continue to pressure Tehran, including through sanctions.

"The whole world now knows that Iran not only sought to hide its uranium enrichment program from the world for more than two decades, but also engaged in covert research and development related to activities that can have only one application: building a nuclear warhead," he said.

But the compromise text - adopted by 32 votes for and only Cuba and Ecuador against - omitted any concrete punitive steps, reflecting Russian and Chinese opposition to cornering Iran. Indonesia abstained in the vote.

Moscow's and Beijing's reluctance to further punish Iran, a major oil producer, makes clear Western states will have to act on their own if they want to tighten sanctions on the country.

That in turn is likely to disappoint Israel, which has not ruled out military action against its arch-foe if diplomatic means fail to stop a nuclear program which the Jewish state sees as an existential threat.

Last week's IAEA report presented a stash of intelligence indicating that Iran has undertaken research and experiments geared to developing a nuclear weapons capability. It has stoked tensions in the Middle East and redoubled calls in Western capitals for stiffer sanctions against Tehran.

Iran showed no sign of backing down in the protracted dispute over its atomic activities, threatening to take legal action against the Vienna-based U.N. agency for issuing the hard-hitting report about Tehran's nuclear program.

Iran says it is enriching uranium only as fuel for nuclear power plants, not atomic weapons. It has dismissed the details in the IAEA report, obtained mainly from Western spy agencies, as fabricated, and accuses the IAEA of a pro-Western slant.

BIG POWER DIVISIONS
Iran considers the IAEA report "unprofessional, unbalanced, illegal and politicized," Soltanieh told the board meeting before the vote, the second against Iran in as many years.

The IAEA resolution's "only immediate effect is a further strengthening" of Iran's determination to continue its nuclear activities, he later told reporters.

"We will not suspend our enrichment activities and our work for even a second," Soltanieh added.

The six powers spearheading diplomacy on Iran - the United States, Russia, China, France, Britain and Germany - this week ironed out the resolution in intense talks and submitted it to the board, a mix of industrialized and developing countries.

It will not placate those in the West and in Israel who had hoped Amano's report would bring about tough international action to corral Tehran.

"At this point, it doesn't really ratchet up the pressure on Iran," said proliferation expert Mark Hibbs of the Carnegie Endowment for International Peace.

But the broad support for the text, including votes in favor from emerging political and economic powers India, Brazil and South Africa, may worry Iran.

With several rounds of nuclear talks having led nowhere, failing even to agree an agenda, the Security Council has imposed four rounds of sanctions on Iran since 2006. But Moscow and Beijing, with hefty trade and energy stakes in Iran, have made clear their opposition to more such steps.

Diplomats cast the powers' resolution text as a compromise between Western states, which would have preferred sharper language, and Russia and China, which resisted out of concern not to lose trade or burn all bridges for talks with Tehran.

Russia has criticized the IAEA for publishing its report on Iran last week. In contrast, Western states seized on it to press for additional sanctions on the Islamic Republic, but Russia has flatly ruled this out at the U.N. level.

The resolution expressed "deep and increasing concern about the unresolved issues regarding the Iranian nuclear program, including those which need to be clarified to exclude the existence of possible military dimensions."

It called on Tehran to open up fully to U.N. inspectors and investigators and "engage seriously and without preconditions in talks" to address nuclear concerns. It asked Amano to report back to the board's next meeting in March.

In November 2009, IAEA governors including Russia and China rebuked Iran for building a uranium enrichment plant in secret. Iran rejected that vote as "intimidation."