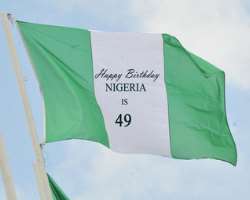 *Ibadan Stands Still For Obesere, Others

In line with the euphoria of the nation's 49th Independence Day celebrations, which promises a busy weekend for fun lovers in Lagos and other parts of the country. Ibadan, Oyo State capital, for instance, literally stands still today, Friday October 2 for Abass Akande a.k.a. Obesere, Latin, Soji Omobanke, Dele Odule, Lizzy Anjorin, David Ayinde, Akin Olaiya, as the ancient city witnesses what has been termed the mother of all shows. The stars are set to storm the largest city, south of Sahara, to celebrate the nation's Independence in a different way. According to Bee Jay Sensational and Tripples T's Doors, organisers of the event, guests will be treated to a variety of freebies like free Etisalat SIM cards, souvenirs among other things. The event which will be hosted at the exclusive Genesis Hall along Molete Road, is billed to begin at 4p.m. till dawn. D.J. AY, one of Nigeria's leading D.J, will also be on hand to dole out music, add quality and class to the event.

Lagos is not left out of the fun as leading communication firm, MTN, hosts the MTN Nigerian Music Festival at the Tafawa Balewa Square, Onikan, tomorrow. The festival is one of a kind as it cuts across different genres of music to meet the demands and tastes of lovers of music of all ages. Four generations of musicians are slated to perform at the event as the company prepares to treat Nigerians to multiple blasts from the past and the present. Among these are Juju music legend, Sir Shina Peters, Mami Watercrooner, Sir Victor Uwaifo, Christy Essien Igbokwe, Olu Maintain, African China, Blacky, son of late Afrobeat sage, Seun Kuti, Weird MC, 2008 MTN project fame winner, Inyanyan, Faze, Bracket and a host of other stars currently rocking the Nigerian music scene. The show, supported by RUYI and Skye Bank, is scheduled to kick off at midday and run till midnight in a continuum of rhythm.

Also in the Centre Of Excellence, a World Premiere and Gala Night will be held at the Genesis Deluxe Cinemas as the much-anticipated movie, The Figurine hits the cinemas. The movie is presented from the stable of Golden Effects Services, a film and television production outfit established with the sole aim of making positive impact and adding value to the growing Nigerian movie industry. Lead casts in The Figurine include director and actor, Kunle Afolayan, Funlola Aofiyebi-Raimi, Ramsey Noah and fast rising screen act, Omoni Oboli, with a special appearance by internationally recognized literature and art icon, Professor Muraina.

Equally on Saturday, one of Nigeria's top five furniture and interior design companies, Interior Options Furniture, would host its annual open day at its showroom, IO World, Ilupeju, Lagos. Tagged Celebrate Your Space, this year's open day will showcase a wide range of innovative furniture, particularly its functional and contemporary range of made in Nigeria furniture. The company will open its doors to invited guests, clients and the general public offering them an opportunity to participate in the IO World experience. The open day is expected to redefine conventional perceptions of furniture and interior design special guest of the day is His Excellency Sig. Antonio Giandomenico, the Italian Consulate General in Nigeria.

Elsewhere, the Catholic Youth Organization of Nigeria (CYON) of St. Brigid's Catholic Church, will be celebrating the country's 49th Independence Anniversary with a programme tagged CYON Extravaganza. The event, a music, comedy as well as talent hunt show, is slated to come up at the church hall, Imma Thani Street, Ijeshatedo, Surulere, Lagos. Music acts expected at the show include Debbe and PSP, while comedians on hand to thrill the audience with jokes are Sabogari, Gate of Heaven, Jude Orhiaria and other upcoming comedy acts. The event will be spiced with presentations by dancing groups like the 2008 winners of the Maltina Street Dance competition, St. Anthony's Dancers and Shakira. Wazobia FM's Yaw will also be on hand to add verve to the show.

On Sunday, in Lagos, City People Entertainment presents the launching and premiere of Okan Okuta, a new movie by Fadekemi Momoh. The movie premiere, slated to take place at the White House Conference Hall, Toyin Street, Ikeja, Lagos, is billed to kick off at 2p.m. with High Chief Oluwasesan Akintunde as the chief launcher of the day. Other dignitaries expected at the auspicious event include the father of the day, Olanrewaju Gentle while the special guests of honour are Mr. and Mrs. Bimbo Yusuf, Mr. and Mrs. Oluwademilade Akpata and Mr. Ganiyu Olatunji. Talented compere, Baba Tee, will be hosting the event, which has a dress code of formality with a touch of red. Entertainment bigwigs are expected to grace the occasion.

Still on fashion, residents of Abuja, the federal capital, will have cause to smile as Persona Boutiques, in the spirit of the nation's independence, presents Fashion Sales At Ceddi Plaza. The event also comes up on Sunday. The Sunday shows, in a way, seal up a regime of activities by various organisations and individuals to celebrate the Independence anniversary. Some of the activities commenced on the eve of the anniversary celebration, while some actually took place on Thursday, October 1.

It was not only political speeches and march-past as the country celebrated it 49th Independence anniversary yesterday. There were equally lighter sides of the momentous occasion. In Lagos, which in addition to serving as the nation's economic nerve centre, doubles as the entertainment hub, Encomium Magazine and Primetime Entertainment hosted fun lovers to a treat in their Green And White Groove. The gig, which took place at the prestigious Nigerian Air Force Officers' Mess, Kofo Abayomi Street, Victoria Island, was described by the organizers as the "biggest, most exciting helluva party, celebrating Nigeria's Independence." It witnessed the attendance of many city big boys and girls.