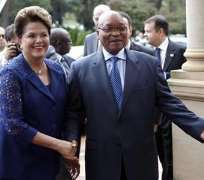 Brazil is launching a top-level drive to expand its economic ties with Africa, a sign of how crises in the rich world are pushing faster-growing emerging economies to trade and invest among themselves.

The new initiative, ordered by President Dilma Rousseff after her three-country trip to Africa last month, comes as nervousness grows in Brazil over the impact in the coming months of Europe's debt crisis and lurch toward recession.

Europe's woes, combined with anemic growth in the United States, are already dampening demand for Brazilian exports and will make it more difficult for Brazil to rebound from disappointing growth of around 3-4 percent this year.

In contrast, the eight most promising emerging economies in sub-Saharan Africa, not including South Africa, have grown by an average of 6.6 percent per year over the past decade, according to Deutsche Bank. That is about the same rate as the BRIC group of big emerging countries Brazil, Russia, India and China and faster than emerging Asian economies.

Africa's total share of Brazil's trade remains small at just over 5 percent but Brazil has rapidly grown its footprint in the region in recent years as it tries to catch up with China's burgeoning investments and influence there.

Rousseff ordered the creation of an "Africa Group" this month led by her trade and industry minister, Fernando Pimentel, to refresh its push in the region.

"The crisis has accelerated this strategy," Pimentel told Reuters. "There will be a dispute for economic space in Africa, and Brazil has to be positioned there."

Pimentel will lead government officials and business executives this month on a 10-day mission to explore opportunities in the three countries that Rousseff recently visited - Angola, Mozambique, and South Africa.

The new thrust builds on progress made under former President Luiz Inacio Lula da Silva, who visited at least 25 African countries and doubled the number of embassies in the region as he looked to establish Brazil as a leader of the developing world.

Brazil's overall trade with Africa has quadrupled since 2002 to $20.6 billion last year, compared to its $82 billion trade with the European Union. The fast-growing ties are overwhelmingly based on the exploitation of commodities as Africa taps Brazilian firms' expertise in mining, oil exploration and tropical agriculture.

Mining giant Vale opened a $1.7 billion coal mine in Mozambique in May that Pimentel said would give a $1 billion boost to Mozambique's trade balance next year. Brazilian construction firm Odebrecht is the largest private employer in Angola, with activities including food and ethanol production, factories and supermarkets. Petrobras, Brazil's state-controlled oil company, is active in Angola in deep-water drilling.

Brazil sees a growing market for its services and goods related to such investments.

BRAZIL'S TRUMP CARD - BEING NICE
Almost half of sub-Saharan African exports now go to emerging and developing markets compared with less than a quarter in 1990, according to the International Monetary Fund. China alone accounts for about 17 percent of the region's trade, with India and Brazil accounting for 6 percent and 3 percent respectively.

"It's still a very small market, income is very concentrated and the space for advance is small," said Bruno Lavieri, an economist at Sao Paulo consultancy Tendencias.

"Even in the long term it will take decades for Africa to be really an important player in Brazil's trade."

Pimentel said his group would be looking at creating new financing mechanisms to support Brazilian projects.

But Brazil believes it has a trump card against China that it intends to play in its new economic push -- put simply, that it treats Africans better. Chinese firms have been accused of flouting worker safety laws in some African nations and have also been criticized for importing Chinese workers rather than hiring locally.

"This is our big selling point - that we are arriving in these countries doing more than just selling products and services," said Pimentel.

"Brazilian companies have a good image in Africa. This compensates for our fragility in financing compared to China."

Brazil's shared Portuguese language with countries like Angola and Mozambique, ethnic ties, a common history of colonialism and Brazil's success in alleviating poverty and hunger at home also help its brand on the continent.

Embrapa, Brazil's agriculture research agency, has operations in four African countries where it is transferring its technology and expertise in raising crop yields that helped turn Brazil into a tropical farming powerhouse.

Rousseff said during her trip that a pharmaceutical plant being financed and assisted scientifically by Brazil should start next year making cheap anti-retroviral drugs to help Mozambique's fight against AIDS.

"Given Brazilian needs and the abundance of natural resources in Africa, it is by no means evident that we are near the limit of the volume of trade between Africa and Brazil," he said.