The Figurine premieres on October 2 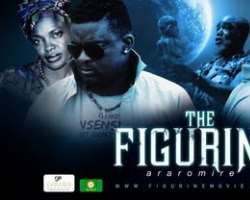 The world premiere of Kunle Afolayan's latest movie, The Figurine, will hold on October 2, 2009, at the Genesis Deluxe Cinemas, Lekki, Lagos.

Though there will be an advanced screening of the movie on October 1 to commemorate Nigeria's Independence Day anniversary, the film will open simultaneously on October 2 at the Genesis Deluxe Cinemas, The Palms, Lekki; Ozone Cinemas, E-Centre, Yaba and Silverbird Cinemas, Victoria Island.

The film would also be premiered in Abuja on October 8, Port Harcourt on October 9 and at the Odeon Cinemas, London, on October 17 Sustaining Nollywood.

Speaking after a press screening of the movie on Thursday, September 17, Afolayan added that The Figurine would also be premiered on soon-to-be-announced dates in Ghana, Kenya, South Africa and the United States.

The filmmaker, who left his job as a banker to produce his first movie, Irapada, a couple of years ago, said The Figurine, which features Ramsey Nouah, Omoni Oboli, Funlola Aofiyebi-Raimi, Jide Kosoko, Wale Adebayo and the renowned Iragbiji, Osun State based artist; Muraina Oyelami who makes a special appearance, took three months to shoot in locations within and outside Nigeria.

He also disclosed that though he has spent N50million naira on the film, he is still spending more to complete the post-production work.

Afolayan explained that he chose the box office instead of releasing the movie straight into the market like some Nollywood film producers do because “We want to guide against piracy and help sustain a distribution framework. We are putting up a platform for distribution so it can run its natural course.” Group endorsement Earlier, the general managers of Genesis, Ozone and Silverbird cinemas where the movie would be screened, endorsed The Figurine. Kene Mkparu of Genesis Deluxe Cinemas who anchored the event said “If you have seen Irapada, this film is a 100 times better.”

General Manager of Ozone Cinemas, Patrick Lee, said he was glad Afolayan followed in the steps of great filmmakers like the late Hubert Ogunde and his late father, Ade Afolayan, known as Ade Love. He said the cinemas in Nigeria “are ready to give backing to Nollywood”, adding that “This industry will go global.”

He urged everybody to support Afolayan because producing movies has been his lifelong dream.”It took me less than five minutes to say we will work with him when he approached us with the film. It took me five minutes to appreciate The Figurine”, began Uwem Jacob of Silverbird Cinemas.

Jacob, who disclosed that the Silverbird's distributor in South Africa is also interested in the movie also said “Nigeria has produced a movie that can compete with Hollywood.”

A thriller, The Figurine is about two friends, Femi (Ramsey Nouah) and Sola (Kunle Afolayan) who discover a carved artwork in the forest

while serving in Araromire village. Against Femi's advice, Sola picks up the mysterious artwork, which bestows good luck on him.

He becomes a successful man with a happy family, but the story changes suddenly after seven years. Things go awry and the two friends and Mona, Sola's wife, have to contend against unseen forces to get their lives back on track