How my editor frustrated me out of journalism – Ngozi Ezeonu 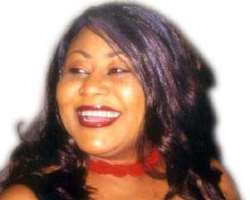 Nollywood big girl Ngozi Egeonu is our guest today. In this interview with Bridget Amaraegbu she opens up first time on how her dream to become a successful journalist was frustrated by her editor. She also spoke on the state of Nollywood and more.
Enjoy

Nothing is certain in the industry now. Why?

The reason for this change of location I heard was that some people started giving the producers some trouble. Some youths began to embarrass them and take their belongings. So, they had to stop using Enugu and moved to Asaba and Lagos. (Laughing) Right now, as I speak to you, Asaba is really bubbling.

Why Asaba? Are you people not afraid of being kidnapped?

(Laughing) Why are you talking about kidnapping again? Well, God has been on our side and by His grace, we won't be kidnapped again. So, we're not scared. Our prayer is that they won't remember us again because I don't think what we are doing is bad. We're taking pains to do something that is good for everybody.

Somebody told me recently that we are helping to cure people with high blood pressure. So, if they kidnap these people who're helping the doctors to heal their patients, who will be doing the job? We just pray they don't remember us. Won't you say amen?

Nollywood has witnessed all forms of criticisms as regards story line, picture quality. Can the new Nollywood deal with all the criticism?

I want to tell you that our movies are good. It is so easy to criticise. It's so easy for people to sit in their houses to watch our movies and think it is rubbish. Our people like to compare Nollywood to Hollywood but they forget that Hollywood has been around for ages and we're just starting. In Hollywood, their movies are not shot with one camera but we do.

I met a South African sometime ago who tried to find out how long it takes us to shoot our movies. And when I told her, she didn't believe me. She asked about how many cameras we use and I said one. The woman began to wonder if we are magicians and I told her we are.

In Hollywood people who sponsor movies are not traders but business men. I mean multi millionaires who invest huge amount of money and wait for returns, no matter how long but it's not so here. When someone invests in movies here, he wants to get his money back immediately. People should help us to grow instead of criticising us.

You and I can put money together to do a movie but it can be better when more people join us. What we're doing is actually magic. Sometimes, we have to be on set from morning till morning, shooting with just one camera.

I equally sit down sometimes and wonder how we do it because it's not easy. If they think we need some adjustments, let them come out and tell us, instead of comparing us with the Americans.

As one of the pioneers of this industry, can you relate the different phases of transformation the industry has gone through?

The first transformation was from doing plays to movies, followed by shooting web cam to the HOV we're using now. Then the acting itself and storylines are a lot better now.

We've also improved in our costumes, locations. Everything about the industry has really improved and I tell you this is just the beginning.

How did you join this industry?

It was Zeb Ejiro who actually gave me the opportunity to showcase the small talent God has given me. He asked me to come for auditioning in his office for Nneka the Pretty serpent part I. But unfortunately for them, Evil Passion 2 came out first. But my first movie was Nneka the Pretty Serpent Part I.

With all the stories that come with the make believe world, how do people see you as an actress?

To them, I'm just doing my job and doing it well. They still see me as me, the simple me, and nothing more.
By God's grace, I've been able to remain in the industry without scandals. So, they're not bothered.

Even if those scandalous stories begin to come up tomorrow, I don't see them getting worried because they know the things I can do and those I can't do.

You're a journalist and yet you decided to remain an actress. Why?

It all started when I did my industrial training (IT) with Radio Lagos where I covered an event at St. Agnes Maryland. I had an interview with the Cardinal in that event. So, after the interview, I had so much to give to the public but my editor said I can't.

I wanted the interview to be published raw, exactly the way he spoke to me. But my editor called me and said if I was sure I want to be alive, I must not practise journalism. So, after I finished my course at Nigerian Institute of Journalism (NIJ), I decided to stop there.

Why would he tell you that?

Whether you agree with me or not, there's so much censorship in everything we do, be it the movies or journalism. Even as we talk now there are so many things I'll say which may not be published.

The kind of journalism I was taught said I owe the public an obligation to tell them the whole truth, exactly the way it is. I just felt that it would be useless practising journalism without exercising that privilege. I don't know if it's a lot better now. (Laughing) If it is, then I can freelance.

Do we employ you to freelance for us?

Can your company pay me? (Still laughing) your company will have to pay me a huge sum for me to do that. If there's anything I can write on, I will because I enjoy writing.

How soon are we expecting a movie produced by you?

For now, you'll only be watching me on other people's production as an actress. I want to remain an actress for now and If I have a change of heart, I'll let you know about it.

Is there any reason why you would not want to go into movie production yet?

If you were at Stephanie Okereke's premiere, then you'd know she has set a standard and anything below that is set back. I'm not trying to be petty. I'm only saying that what she did was wonderful and any person trying to do anything below what she did is joking. Whenever I want to go into production, I'll want to do something within or above that standard. But for now, I want to remain an actress.

A lot of married women out there would like to be actresses but many of them are scared of losing their families and so on. Do you think there's anything to be scared of in doing this job?

There's really nothing do be scared of. A married woman once told me that she wanted to become an actress but her husband said no, and I advised her to stop nursing the ambition. You have to discuss with him. If he likes it and gives you his support, fine. But if he doesn't like it, then don't even try. It takes a lot to be an actress.

It takes time, patience, perseverance. You might not be at home when he needs you. So if he says no to your dream of being an actress, then kill the dream because if you don't, you may lose your family and the career.

Suppose your husband says you should stop acting?

He will not. You know why? He met me an actress and we talked about it. I told him that acting is what I love to do forever and it was okay by him. So, if he wakes up tomorrow to say that, it means he's breaching the contract.

(Laughing) Abi no be contract? On a serious note, that will be a breach and I don't know if I'll take it or not. It gives me so much joy doing what I do and he supports me. Even my children are solidly behind me. They're all proud of me.

Can he afford to go on location with you?

Ah! What's he looking for now?

He has his own job to do or does he want to be an actor? (Laughing) If he decides to be an actor, he'll have to follow due process. From registration to auditioning. He can't go to location with me because he cannot afford the time.

Most times, when I watch you on screen, I see a mother, a lot of maturity. How does he feel watching you on screen?

He feels great and very proud of me because, according to him, I'm doing it the right way.

Does it account for why you don't play romance on screen?

I can't do romance on screen because I won't do it well. So, it's better for me not to try it at all. I'm one person who believes that whatever is worth doing should be done very well. I can't play a romantic role when I know that everybody is watching me. Our movies go across Nigeria, Africa up to America, which means everybody will see me kissing another man on screen! I won't play a romantic role, no matter how much is involved.

Are you so much tied to the African sense of assessment?

I am just me and even before I got married, I never played romantic roles. No.

If you're invited for my wedding, how would you dress?

The way I'll dress depends on my mood. I can decide to wear a pair of jeans and top to your wedding. I'm a very simple person when it comes to dressing. If I wear my jeans and you don't like it, then ask your bouncers to bounce me.

As a mother, how do you nurture your children to become great citizens of this nation?

Every mother is expected to direct their children, which is precisely what I do. I teach them those things I know that are right because I cannot live their lives for them.

Again, children have the spirit of learning, by copying their parents. So, be prepared to do those things you tell them to do. I don't practise the saying of 'do what I say but not what I do'.

Do you have any message for up and coming artistes?

My advice is that they should not be desperate because desperation is evil and can lead them to do anything to achieve their aims. They should take one step at a time. And if at the end they find themselves up there, I advise them to let their heads remain on their shoulders which is the most difficult aspect of stardom- that is stardom management.