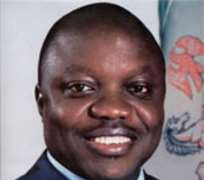 There is tension in Delta State over the way the Governor of the state,Emmanuel Uduaghan allegedly squandered the sum of N700 billion being the money accrued the state for the Federal Statutory allocation.

The tension was further heightened when the state government went to the capital market to borrow N 100 billion through the Bond Insurance program,and this is fully subscribed on a fixed rate coupon of 14% and falls due in 2018.

The people of the state are angry that in spite of the huge sum of money received as federal allocation and Internally Generated Revenue running into billions,the state government under Governor Emmanuel Uduaghan has gone cap in hand to borrow from the capital market.

It was gathered that since the advent of Dr. Uduaghan's administration,not less than N700 billion has been received as federal allocation alone,yet no visible development but stories of woes as most of the roads in Delta State are now death traps.

There is no single mass housing project instead all you see are palatial homes and personal estates of the cronies of the government of the day.It was discovered that projects such as the N24 billion Ughelli/Asaba dual carriage way,the N25 billion Independent Power Project,the Asaba International Airport Project awarded since 2007 for N7 billion and reviewed upwards with N17 billion,the N3.7 billion Warri Industrial park,the N14 billion street light project with over N 80 million monthly bill for diesel,the N4.5 billion expansion of Osubi Airport Runway,the N3.6 billion caricature beautification/electric decorations around the state and the N3.7 billion civic/event centre and many others have all been abandoned.

This has caused the members of the House of Assembly to adjourn its plenary until the governor accounts for these projects.

Also,the state branch of the Democratic Peoples Party,(DPP) through its state chairman,Chief Tony Ezeagwu condemned in strong terms the mismanagement of the state resources by Governor Emmanuel Uduaghan.

The party,therefore,called on Dr.Emmanuel Uduaghan to present the Deltans its performance record since assumption of office 5 years ago vis-à-vis the revenue receipts.