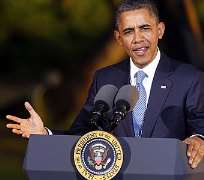 President Barack Obama served notice on Sunday that the United States was fed up with China's trade and currency practices as he turned up the heat on America's biggest economic rival.

"Enough's enough," Obama said bluntly at a closing news conference of the Asia-Pacific Economic Cooperation summit where he scored a significant breakthrough in his push to create a pan-Pacific free trade zone and promote green technologies.

Using some of his toughest language yet against China, Obama, a day after face-to-face talks with President Hu Jintao, demanded that China stop "gaming" the international system and create a level playing field for U.S. and other foreign businesses.

"We're going to continue to be firm that China operate by the same rules as everyone else," Obama told reporters after hosting the 21-nation APEC summit in his native Honolulu. "We don't want them taking advantage of the United States."

China shot back that it refused to abide by international economic rules that it had no part in writing.

"First we have to know whose rules we are talking about," Pang Sen, a deputy director-general at China's Foreign Ministry said.

"If the rules are made collectively through agreement and China is a part of it, then China will abide by them. If rules are decided by one or even several countries, China does not have the obligation to abide by that."

Even as Obama issued the veiled threat of further punitive action against China, it was unclear how much of his tough rhetoric was, at least in part, political posturing aimed at economically weary U.S. voters who will decide next November whether to give him a second term.

Obama insisted that China allow its currency to rise faster in value, saying it was being kept artificially low and was

hurting American companies and jobs. He said China, which often presents itself as a developing country, is now "grown up" and should act that way in global economic affairs.

The sharp words between the U.S. and China contrasted with the unified front that Asia-Pacific leaders sought to present with a pledge to bolster their economies and lower trade barriers in an effort to shield against the fallout from Europe's debt crisis.

The members of APEC, which accounts for more than half of the world's economic output, said they had agreed on ways to counter "significant downside risks" to the world economy.

That followed an appeal by Obama, seeking to reassert U.S. leadership to counter China's growing influence around the Pacific Rim, for a commitment to expand trade opportunities as an antidote to Europe's fiscal woes.

International Monetary Fund chief Christine Lagarde, in Honolulu to consult with APEC leaders, said the euro zone upheaval risked sweeping the world economy into a "downward spiral" that all countries had a stake in resolving the crisis.

TRADE LIBERALIZATION PROMISED
APEC said in a final communique: "We recognize that further trade liberalization is essential to achieving a sustainable global recovery in the aftermath of the global recession of 2008-2009."

The communique also expressed a firm resolve "to support the strong, sustained and balanced growth of the regional and global economy" -- a clear reference to U.S. concerns about a huge trade deficit with China's export-driven economy, fiscal problems in developed nations and the low savings rate in the United States.

In another bow to U.S. pressure, APEC committed to reducing tariffs on environmental goods and services to 5 percent as a way to promote green technology trade, overcoming China's resistance to the idea.

Differences persist among APEC members -- a point hammered home by U.S.-China tensions -- and the question remains how far leaders will be able to go in turning promises into action. Many, Obama included, will face resistance to opening markets further to foreign competition.

Obama's public denunciation of China's policies came as he faces pressure at home, from Republican presidential contenders as well as fellow Democrats, for a tougher line on Beijing. But U.S. leverage is limited, not least because Beijing is America's largest foreign creditor.

Though Obama acknowledged a "slight improvement" in the value of China's yuan, he insisted it was not enough.

The United States has long complained that China keeps its currency artificially weak to give its exporters an advantage. China counters that the yuan should rise only gradually to avoid harming the economy and driving up unemployment, which would hurt global growth.

Hu was quoted by Chinanews.com in Beijing on Sunday as saying a big appreciation in the yuan against the dollar would not help U.S. trade and unemployment problems.

The yuan inched up against the dollar. Dealers said Hu's comments in Honolulu indicated that China had no intention of letting the currency rise faster in the near term.

U.S. ENGAGEMENT
Obama declared U.S. engagement in the Asia-Pacific region as "absolutely critical" to America's prosperity. By harnessing the potential for expanded trade with the world's fastest-growing region, Obama hopes he can create U.S. jobs to help him through a tough reelection fight in 2012.

Obama's drive toward a pan-Pacific free trade zone -- the signature U.S. achievement of the summit -- got a boost when Canada, Mexico and Japan said they were interested in joining talks now under way among nine countries, and they agreed to complete the detailed framework in 2012.

The Philippines was discussing the matter, U.S. officials said.

The Transpacific Partnership adds momentum to Obama's pledge to double U.S. exports, made more urgent by the virtual collapse of the Doha round of trade talks. A free trade zone in the region would outstrip the market size of the European Union. But for Japan, such a deal faces major political obstacles at home.

Yet there was little promise of immediate economic dividends as such trade deals often take years to take effect.

Obama is seeking to assure allies of a U.S. "pivot" as China flexes its economic and military muscles in Asia and beyond. But leaders may doubt whether Washington can avoid being distracted by economic woes at home and foreign policy priorities like Afghanistan, Pakistan and Iran.