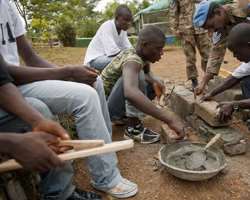 “The war is over, go and enjoy life,” Sierra Leone’s former president, Ahmad Tejan Kabbah, declared at a January 2002 symbolic burning of weapons and ammunition to mark the end of the country’s civil war. As smoke from the weapons spiralled away at Lungi, in eastern Sierra Leone, he added: “The curfew is hereby lifted.” Sierra Leoneans celebrated the end of a decade-old war that had killed 150,000 people and wrecked the country’s social infrastructure.

A massive UN peacekeeping operation involving 17,000 troops had disarmed 45,000 combatants, including 6,774 child soldiers. In 2006, UN troops began to withdraw, despite concerns that Sierra Leone’s weak national institutions could not undertake the task of reconstruction on their own. The UN Security Council referred these concerns to the UN Peacebuilding Commission (PBC). In December 2006 the PBC approved $35 million to support programmes for capacity building, democracy, good governance, justice, security, youth employment and other tasks.

Sierra Leone was one of the Commission’s first beneficiaries. The Security Council established the Commission in December 2005 to coordinate with international donors, financial institutions, governments and troop-contributing countries to “marshal resources” and develop “integrated strategies for post-conflict peacebuilding and recovery.”

Countries emerging from conflict need peacebuilding, argues Michael Von Schulenburg, the executive representative of the UN Secretary-General in Sierra Leone and head of the country’s peacebuilding programme. “Peacebuilding is access to water, to education, to basic health care — access to opportunities,” Mr. Von Schulenburg explains in an interview with Africa Renewal.

The transition from peacekeeping to peacebuilding is often difficult, notes Mr. Von Schulenburg. But it is essential to enable the UN to better align its priorities with socio-economic and political needs of a country after war.

Mr. Von Schulenburg believes that Sierra Leone has had an exemplary peacebuilding programme. “We don’t have armed groups,” he says. “They are all integrated. And the combatants have not become criminals, as so often happens.” The UN has also implemented a community small-arms collection programme, to gather up weapons not handed in during the formal disarmament exercise.

According to a 2009 evaluation of peacebuilding projects commissioned by the Sierra Leonean government, the UN Integrated Office for Peacebuilding in Sierra Leone and the Peacebuilding Support Office in New York, many of the key goals have been met. The UN Development Programme, which managed most of the projects, achieved an 87 per cent completion rate. “Measured on the scale of budget delivery, this is clearly a remarkable performance,” states the evaluation.

An emergency programme to support the energy sector brought an increase in power capacity from 25 megawatts to 31 megawatts in the capital, Freetown, and from 0.5 megawatts to 5 megawatts in Bo and Kenema, two of Sierra Leone’s larger cities. A project aimed at promoting youth empowerment through micro-credit benefited 4,500 young women, placed 1,000 unskilled youths in training institutions and 300 others in apprenticeship programmes in official institutions.

To enhance capacity in the justice system, another project supported the training and hiring of senior barristers, legal officers, state counsels, clerks and support staff. As a result, a backlog of 700 cases was cleared within two years, and current court cases are being heard much faster.

Mr. Von Schulenburg has recommended that peacebuilding operations in Sierra Leone conclude in 2013. A decision on the end date will be taken by the Security Council. But even if the peacebuilding activities wind down, regular UN agencies will continue their support for the country’s development efforts, he adds.

The general elections in 2012 will test Sierra Leone’s nascent democracy. There are concerns that the elections could lead to violence. Mr. Von Schulenburg maintains that such concerns are justified, but manageable citing the success of a recent by-election in a diamond district with high unemployment.

There is a huge unemployment challenge in Sierra Leone, however. In 2010 the World Bank estimated Sierra Leone’s unemployment at 80 per cent. During a visit in 2007, UN Secretary-General Ban Ki-moon also raised concerns about the country’s high unemployment.

Sierra Leone’s main income-generating sources are in the extractive sector — gold, diamonds, bauxite and rutile. But as a 2011 report by experts of the United Nations Economic Commission for Africa and the African Union pointed out, in Africa investments have been mainly in the extractive sector, which produces few jobs (see Africa Renewal Online).

Preparing Sierra Leone for an economic boom will be vital for preventing future conflicts. The country’s abundant natural resources include “Gold, iron ore, diamonds, titanium, bauxite, you name it. Now oil and gas, potentially,” he notes. “So this country could become very rich suddenly. And how do you manage these?”

Currently, the data on the country’s untapped wealth contrasts starkly with the poor state of its social development. A 2011 World Bank report states that life expectancy in Sierra Leone is 48 years, while the adult literacy rate is only 41 per cent. If used properly, the proceeds from Sierra Leone’s natural resources can help alter such indicators.

If the Peacebuilding Commission closes shop in 2013, as Mr. Von Schulenburg anticipates, the UN can lay claim to a number of achievements: disarming ex-combatants, supporting the consolidation of democracy and promoting a growing economy. Next year, the World Bank forecasts, the economy will grow by another 8.8 per cent. With the right preparations, the anticipated economic boom may hold more lessons for countries that were once torn apart by civil strife.