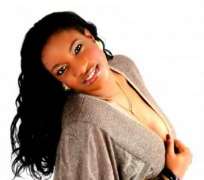 I really do not know why am suddenly in the news now. I don't have an idea but the thing is I keep telling everybody that interview me right from the beginning of my career, I keep saying that you cannot escape it.