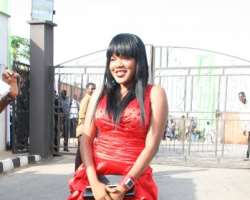 Toyin Aimaku is one Nollywood actress that has risen within a short period after taking a plunge in the world of make-believe.

She came on the scene few years back, and her face has become prominent in many movies and even soap operas, including Etanu and the Lion of Magun, series of the Wale Adenuga conceived Super Story.

She is one lady that is known to have at different points in time been romantically linked with one man or the other, but in recent time the fair-skinned actress seems to have found true love in the arms of Adeniyi Solanke.

Aimaku, who has been bombarding her social networking site with series of messages as to how much she's happily in love with Solanke, was once quoted as saying that she gets admirers every minute.

Waxing lyrical, Toyin said: "I am happy my man understands my job ... the person that understands me most in this world. Blood of my blood and flesh of my flesh. Something new is happening in my life"

In case Solanke has any doubt, Toyin reassures him, "my hubby to be. I love you so much and may GOD bless you more and always."

Solanke and Aimaku's paths crossed some years back during her trip to the United Kingdom where the dude stays and they have since remained inseparable. It was further gathered that she tries her possible best to visit her fiancÈ in the Gordon Brown's country often.

Aimaku cut her teeth under the tutelage of self-styled actress Bukky Wright a few years back and she has remained glued to the show business even as several tales have pervaded her rise.

Recently, she disclosed that she is very happy to have a man, who loves, cares and understands her and those close to her confirmed that their love affair has been witnessing good tidings with many people hoping it would eventually lead to the altar.

Incessant calls to ascertain the truth about her alleged proposed marriage were not fruitful as her telephone was consistently not available.

It is, however, unclear if she would remain in the movie world, which has brought so much joy and fame in quick succession as she once said in an interview that she's unsure if she would be an actress for life, saying that everything depends on her man regarding whether to quit or not. This is because she would forever be respectful and abide by his decisions.