Bukky Ajayi, others Walk against piracy in Lagos 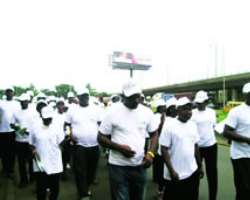 •Copyright owners during the walk
Listen to article

Apparently reiterating its usual stand against piracy of intellectual property in the country, the Nigerian Copyright Commission, NCC, recently staged an awareness walk in Lagos. Tagged: Piracy is Evil, Walk against it, the long but strategic street walk took officials of the NCC, their collaborators and other stakeholders in the country to the streets.

Others who joined in the walk include officials of the FRSC, the police, Customs, journalists and a handful of copyright owners, one of who was popular Nollywood actress, Mrs. Bukola Ajayi.
Ajayi was the Special Guest of honour at the programme, which she flagged off with a speech on the need for all and sundry to work against piracy at all levels.

After the speech, the awareness walk began with participants clad in their white T. shirts and fez caps, which bore inscriptions on the theme of the awareness walk. They trooped out in large numbers from the Commission's office at Iganmu area of Lagos.

The walk was made lively with melodious songs and drumming from the Brigade band hired to spice up the event. And every participant shared fun amidst dancing and singing in the Walk, which moved from Orile-Iganmu through the National Arts Theatre, the National Stadium, famous Adeniran Ogunsanya Street, Iponri area among other places.

It was such a success that curious members of the public persistently asked questions with regards to the purpose of the awareness programme and the enthusiastic participants promptly explained to them accordingly.

The five-hour walk finally ended at quarter past two in the afternoon when the procession returned to its Orile-Iganmu office in Lagos and the participants were treated to refreshment and gifts.
In his address, delivered by the NCC zonal manager, Mr. Ogbonnaya, the Director General of the NCC, Mr Adebambo Adewopo, said that the Walk was one of the activities organized to mark the 20th anniversary of the Commission's existence.

The DG gave said further: “ This celebration is not primarily for the staff of the Commission but for the Copyright community and the entire Nigerians who in one way or the other are beneficiaries of the copyright system. This is a period for the entire copyright industry to re-examine the different aspects of copyright administration and enforcement, acknowledge the success so far and advise on areas of improvement. I must emphasize that copyright is a private right. Copyright owners are primarily responsible for its protection.”

Explaining that the Federal government, through the NCC, assists in protecting the rights of copyrights owners, he noted “ The level of copyright violation is still high in Nigeria. Piracy is one of the greatest hindrances to creativity. It denies authors the ability to earn a living out of their creative effort.”
While congratulating the DG and staff of the commission, on the 20th anniversary ceremony and commending their effort in combating piracy in the country, Ajayi said the right owners and stakeholders have maintained a long time collaboration with the NCC, knowing fully well the importance of protecting these rights.

She recalled that many citizens in the country depend on their creative abilities to make a living, hence “ An effective system does not only sustain the creators of the work but also create employment and generate money to government in the form of taxes. It is also well known that piracy sustains other criminal activities such as drugs, smuggling, cultism and other vices.

This is why the Nigeria Copyright Commission must be supported in their fight against piracy. We are aware that the Commission has been carrying out this enforcement mandate under its Strategic Action Against Piracy (STRAP) .The copyright industry will continue to support the Commission in this area. Piracy is a crime and must not be allowed in our society.” Ajayi submitted.