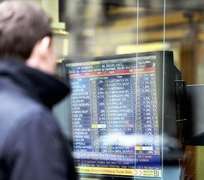 In a dramatic escalation of the euro zone debt crisis, Italian 10-year bond yields shot above the 7 percent level that is widely deemed unsustainable, reflecting an evaporation of investor confidence and prompting German Chancellor Angela Merkel to issue a call to arms.

Merkel said Europe's plight was now so "unpleasant" that deep structural reforms were needed quickly, warning the rest of the world would not wait. "That will mean more Europe, not less Europe," she told a conference in Berlin.

She called for changes in EU treaties after French President Nicolas Sarkozy advocated a two-speed Europe in which euro zone countries accelerate and deepen integration while an expanding group outside the currency bloc stayed more loosely connected -- a signal that some members may have to quit the euro if the entire structure is not to crumble.

"It is time for a breakthrough to a new Europe," Merkel said. "A community that says, regardless of what happens in the rest of the world, that it can never again change its ground rules, that community simply can't survive."

Portugal and Ireland were forced to seek EU-IMF bailouts when their borrowing costs reached similar levels and clearing house LCH.Clearnet sounded another alarm by increasing the margin it demands on debt from the euro zone's third largest economy, effectively raising the cost of holding Italian bonds.

The European Central Bank, the only effective bulwark against market attacks, wasted no time intervening to buy Italian bonds in large amounts but remains reluctant to go further.

"The ECB is buying aggressively," one trader said.
Italy has replaced Greece at the center of the euro zone debt crisis and is on the cusp of requiring a bailout that Europe cannot afford to give.

Unlike Greece, an Italian default would threaten the entire euro project. EU treaty changes could take a year or more. Rome does not have that much time.

Euro zone officials said a bailout of Italy was not being planned for. "Financial assistance is not in the cards," one official said, adding that the bloc was not even considering extending a precautionary credit line to Rome.

Having lost his majority in a key parliamentary vote, Berlusconi confirmed he would resign after implementing economic reforms demanded by the European Union, and said Italy must then hold an election in which he would not stand.

He opposed any form of transitional or unity government -- which the opposition and many in the markets favor -- and said polls were not likely until February, leaving a three-month policy vacuum in which markets could create havoc.

Italian President Giorgio Napolitano, expressing alarm about a collapse in market confidence, said there was no doubt about the resignation of Berlusconi once economic reforms were implemented by parliament within days.

"Therefore, within a short time either a new government will be formed ... or parliament will be dissolved to immediately begin an electoral campaign," Napolitano said.

Even with the exit of a man who came to symbolise scandal and empty promises, it will not be easy for Italy to convince markets it can cut its huge debt, liberalize the labor market, attack tax evasion and boost productivity.

"There is no guarantee (Berlusconi's) successor will be able to do a better job. Just keep your eyes on the Italian yield for now," Christian Jimenez, fund manager and president of Diamant Bleu Gestion, said.

While Italian bonds blew out, worries that the debt crisis could be infiltrating the core of the euro zone were reflected in the spread of 10-year French government bonds over their German equivalent blowing out to a euro era high around 140 basis points.

FRUSTRATION
Policymakers outside the euro area kept up pressure for more decisive action to stop the crisis spreading.

"Our sense is that if we do not act boldly and if we do not act together, the economy around the world runs the risk of downward spiral of uncertainty, financial instability and potential collapse of global demand ... we could run the risk of what some commentators are already calling the lost decade."

Berlusconi has reluctantly conceded that the IMF can oversee Italian reform efforts.

But there are doubts about the efficacy of those complex plans, and with Italy's debt totaling around 1.9 trillion euros even a larger bailout fund could struggle to cope.

Lagarde said she was hopeful the technical details on boosting the European Financial Stability Fund (EFSF) to around 1 trillion euros would be ready by December.

Many outside Europe are calling on the ECB to take a more active role as other major central banks do in acting as lender of last resort. German opposition to that remains implacable, seeing it as a threat to the central bank's independence.

But with the ECB just about the only buyer of Italian bonds, according to traders, it will have to act more aggressively to contain the latest wave of crisis, despite internal opposition to its bond-buying program.

"The ECB will be drawn like every one else by the weight of gravity (to act)," a second euro zone official said.

GREEK DRAMA
With the markets' fire turned firmly on Italy, Greece's struggle to find a new prime minister became something of a sideshow, but one which demonstrated the difficulty in taking decisive action anywhere within the euro zone.

Greek Prime Minister George Papandreou said he was stepping down without saying who would succeed him as the nation heads toward bankruptcy, but party sources said leaders had agreed it would be the speaker of parliament. [ID:nL6E7M90T2]

Parties from left and right settled on veteran socialist Filippos Petsalnikos, barring-last minute snags, the sources said, turning to their own political class after ditching a plan to recruit a former top European Central Bank official.

The socialist and conservative parties had wanted former ECB vice-president Lucas Papademos to lead a government of national unity but he appears to have made demands about his level of influence which they could not swallow.