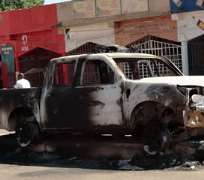 The bombings by the militant Islamist group Boko Haram that killed at least 100 people in the northern Nigerian state of Yobe on November 4, 2011, were an indefensible attack on human life, Human Rights Watch said today.

Since the beginning of 2011, Boko Haram has been implicated in attacks that have killed more than 425 people, including police officers, soldiers, community leaders, politicians, Islamic clerics, Christian pastors, and church members. The attacks on November 4 resulted in the highest death toll in a single day since Boko Haram began its campaign of violence in Nigeria in July 2009.

“Boko Haram has once again demonstrated its utter disregard for human life,” said Corinne Dufka, senior West Africa researcher at Human Rights Watch. “The authorities should act swiftly to bring to justice those responsible for these terrible crimes and for earlier attacks that left hundreds dead.”

The latest attacks, including an apparent suicide car bombing, targeted the police state headquarters in Damaturu, the capital of Yobe State, as well as police housing, government buildings, banks, and at least six churches. Earlier in the day, the group also carried out several attacks in Maiduguri, the capital of neighboring Borno State, including a suicide car bomb attack on the headquarters of the military task force, and attacks in the town of Potiskum in Yobe State.

Boko Haram seeks to impose a stricter form of Sharia or Islamic law in northern Nigeria and recruits members through its populist anti-corruption message.

Human Rights Watch has documented dozens of attacks by suspected Boko Haram members over the past year including attacks on police stations, military facilities, prisons, banks, beer halls, and churches. On August 26, a suicide car bomb attack at the United Nations headquarters in Abuja, the nation’s capital, killed 24 people and left more than 100 others injured.

Alleged Boko Haram members have gunned down several dozen police officers in the streets and outside their homes, or dragged them out of their cars and killed them in front of their families. Numerous others have been killed during attacks on police stations or while guarding government buildings, banks, and churches. These attacks have killed more than 70 police officers so far in 2011 alone. The vast majority of these incidents have taken place in Borno State, but attacks have also been carried out in the northern states of Adamawa, Bauchi, Gombe, Kaduna, Katsina, and Sokoto.

Violence associated with Boko Haram, which means “Western education is a sin” in Hausa, can be traced to five days of clashes in July 2009 between the group and members of the security forces in Borno, Yobe, Bauchi, and Kano states that left more than 800 people dead, including at least 30 police officers.

Human Rights Watch has also documented serious abuses, including extrajudicial executions, by the Nigerian police and military in response to the Boko Haram violence. The police, and in some cases the military, have carried out extrajudicial executions of numerous suspected members of the group, including several dozen people who were publicly executed at the police state headquarters in Maiduguri. Those summarily executed included the Boko Haram leader Mohammed Yusuf on July 30, 2009, and Yusuf’s 72-year-old father-in-law, Baba Fugu Mohammed, on the following day. Witnesses told Human Rights Watch that both men were shot by the police officers outside the police headquarters.

The Borno State High Court in April 2010 found that the killing of Baba Fugu Mohammed was “illegal, unconstitutional and a violation of his right to life,” and ordered federal and state authorities to pay N100 million (US$65,000) in damages to his family, exhume his body for proper burial, and apologize for their “reprehensive and unconstitutional” acts. Although the government did not challenge the facts of the case at trial, it has appealed the ruling. The appeal has not yet been heard.

In July 2011 the attorney general’s office filed criminal charges against five police officers, including three assistant commissioners of police, for the killing of Mohammed Yusuf and his followers.

“The Nigerian authorities need to ensure that all law enforcement operations in response to Boko Haram are conducted in full accordance with international human rights standards,” Dufka said. “The most effective way to counter the abhorrent tactics employed by groups like Boko Haram is to scrupulously adhere to respect for human rights and the rule of law.”