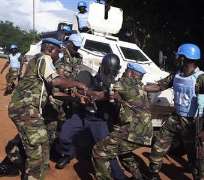 Liberians trickled into polling stations in early voting Tuesday after the run-up to the presidential election was marred by a day of deadly clashes and an opposition call for a boycott.

Incumbent Ellen Johnson-Sirleaf is tipped to win after leading last month's first round vote and because second placed challenger Winston Tubman has withdrawn from the contest citing electoral fraud.

But, a low turnout in the run-off risks handing Johnson-Sirleaf a tougher new mandate, despite broad international praise for her and condemnation of the boycott call.

United Nations peacekeepers were deployed on the streets of Monrovia, but the capital was quiet overnight after a day of clashes that officials say killed at least two. There were no reports of trouble elsewhere in the West African state.

Reuters reporters said numbers at polling stations in Monrovia Tuesday were well down on those when Liberians turned out in the rain during the first round vote on Oct 11 in the first locally-organized presidential election since a civil war ended in 2003.

On one street corner in the crumbling coastal city, a group of two dozen young men stood discussing politics.

"I will never vote, the government has stacked things massively against us ... They came in there shooting, not just teargas, at harmless people" said Anthony Korvayan, 28.

The U.N. has confirmed the death toll was two.
But, standing next to Korvayan, 34-year-old Benedict Hena held up an ink-stained finger, and said he had voted: "It is our right."

The vote is expected to provide a measure of the West African state's progress since civil war ended in 2003 and to pave the way for new investment, but fears are rising it could instead usher in open-ended political turmoil.

"I think overall in the next few hours turnout will accelerate," said Senesee Freeman, an observer for election watchdog IFES.

"Others are just having a wait-and-see attitude. As people leave the polling center with their voter cards and ink on their fingers, that will encourage other voters."

U.S. President Barack Obama called on Liberian security forces to show restraint and allow peaceful protest, and he warned against any voting violations.

"Those gains (to consolidate democracy) must not be set back by individuals who seek to disrupt the political process," he said. "The international community will hold accountable those who choose to obstruct the democratic process."

After voting in Fefee, her home town just outside Monrovia, Johnson-Sirleaf sought to dampen tensions, saying she regretted the loss of life and promised an investigation.

"Liberia is going to move forward. We will find a way to heal the wounds. We will also find a way to reconcile people," she said, vowing to make youth a priority of her mandate.

However, Tubman, a Harvard-educated former U.N. ambassador, has seized on the clashes to criticize Johnson-Sirleaf, saying she had used "violence against peaceful people."

Speaking to reporters Tuesday, Tubman remained vague about his next move. "We will boycott today and wait and see how that pans out."

Liberia is one of the world's poorest countries, with more than half its citizens surviving on less than 50 U.S. cents a day. Fourteen years of intermittent fighting killed nearly a quarter of a million people and has left its infrastructure in ruins.

"DON'T WANT TROUBLE"
Johnson-Sirleaf -- whose standing at home, where many complain that change has come too slowly, is not always on a par with international praise for the recently-named Nobel Peace Prize winner -- took nearly 44 percent of the first round vote.

She has since won the backing of the third-placed finisher, former warlord Prince Johnson.

Tubman -- who won about 33 percent in the first round -- has alleged three ballot boxes were tampered with and said he would only participate in a run-off if it were delayed by two to four weeks and counting procedures were amended.

Many of his supporters are unemployed former fighters and, while it is too early to be sure of turnout, analysts warned a successful boycott would complicate the incumbent's next mandate, perhaps forcing her into dialogue with Tubman.

"Instead of consolidation and construction, it will be a second mandate of justification and possibly power-sharing," said Lydie Boka, head of risk consultancy StrategiCo.

Turnout in the first round was a touch more than 71 percent.

Analysts had anticipated that a smooth election would trigger a surge in foreign investment in resources such as iron ore and oil, which have already attracted major firms including ArcelorMittal, BHP Billiton and Anadarko Petroleum.

Many in Liberia are just hoping for peace.
"We don't want any trouble. But monkey and baboon not getting along," said a Monrovia resident who called himself Tarr. Liberians have nicknamed Johnson-Sirleaf 'monkey' and Tubman 'baboon' and frequently used stuffed animal mascots during campaigning.