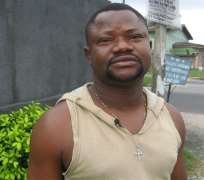 He began with Ehi Buckor in the movie, Ebuwa, where the then wannabe played the lead role in his language-based movie, premiered in
over 20 cities across the globe, and has promoted immensely the Edo Language. Next, he unleashed British based Beverley Naya in Home In Exile, a movie that should premier in over 20 cities before the end of the year. According to feelers, Lancelot Imasuen is not done.

The top movie director, who jetted out of the country to the U.S. mid last week, has begun work on his next project, a platform for discovering fresh talent.

"I'm excited about this project. I've always dreamed of acting and I know I have what it takes. It's what I've always wanted to do," said Amanda.

"It's a great opportunity for me to showcase my skills. **Firedefia** is the platform that I've been looking for." According to Imasuen, who has been instrumental in the making of a dozen Nollywood stars, "It is in line with my mission of discovering new faces for the industry. Now is the time to go back to the basics and give Nigerians new stars."