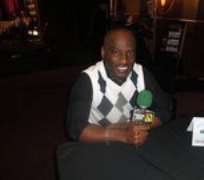 One of Nigeria's finest showbiz guru and celebrated radio/television presenter Otunba Dayo Adeneye fondly called D1 has joined the movie industry.The principal partner of top record label,Kennis Music who over the years built a showbiz empire with his friend Kenny Ogungbe was sighted several days back at a movie location in Ikorodu an outskirt town where Yoruba movies are produced.

Though not his first time of attempting to act in movies,D1 has featured in soap operas like the rested'Palace' and Wale Adenuga's 'Superstory'.
He was in Ikorodu to play a major role in Muka Ray's new production.He featured in the movie alongside other top actors like Yinka Quadri,Ebun Oloyede and Tijani Adekola a.k.a Kamilu Kompo among other acts.

D1 also revealed that he would do everything to shuttle between his busy schedules and movie location schedules.He was also enthusiastic that he will love to feature alongside popular movie stars like Iyabo Ojo.