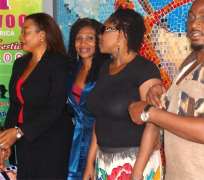 It is no longer news that Nollywood is being rated as second largest film industry in the whole world. But what is currently news is the fact that the industry is steadily on course to capture the world.

The latest effort in this regard is the forthcoming Nollywood North America Film Festival slated for next month in Munich, Canada. The festival, from all indications, is not only a celebration of Nigerian movies in a distant land but a display of the beauty, culture, and the creative ingenuity of Nigerian film makers.

Ahead of the festival which holds between this September 24 and 27 under the theme, “Bridging the Gap”, various stakeholders of the industry, including film makers, make-up artists, costumiers and Nollywood stars alike are expected to explore the opportunity provided by the festival to showcase the best of Nollywood to the world.

Ace film maker and director, Mr. Lancelot Oduwa Imasuen, representing the organisers at a press parley held early in the week, informed that the festival, heavily backed by the Nigerian High Commission in Canada, is conceived as a direct response to the idea of popularising Nollywood movies, especially in North American countries. Imasuen, whose ideas gave birth to the festival, said it would further reposition and help put Nollywood on the global map of leading film making nations.

According to him, the festival became necessary following the successful premiere of the documentary on Nigeria called “Nollywood Babylon' made by some Canadian film makers, which allowed Nollywood to present itself without any distortion to the world.

“The festival is connected with the documentary called 'Nollywood Babylon' made by some Canadian film makers, where I happened to be the leading figure concerning the phenomenon that is called Nollywood,” the Edo born internationally acclaimed film maker recounted. Continuing, he said, “ When the Canadian film makers arrived the country, I took them to Abuja where the documentary was recorded and presented very well.

And after the documentary, I was invited to Canada for its world premiere, attended by the second in command of the Nigerian High Commission in Canada, Ms. Ifeoma Chinwuba. After the premiere, I took the floor to debunk some of the mis-presentations about Nigeria as contained in the documentary .

That was what led to the CNN's Screen Room where I spoke extensively about the huge potentials inherent in Nollywood and what makes the second largest film producing nation globally very unique.” 'Thereafter, the Nigerian ambassador to Canada, Professor Baba, who was impressed by the outing, later invited me for a talk in his office. After the talk, he endorsed the Nollywood North American Film Festival.

That's how the idea of the festival came about,” Imasuen explained. However, the exponent of Edo language movie, recently honoured by City People Magazine at his native Benin, Edo State, for his immense contributions to the nation's home video scene, noted that aside showcasing the best of Nollywood, the theme of the festival is borne out of the need to get Nigerian movies into the consciousness of the movie bluffs in North America, where according to him, the local movies are heavily pirated.

The historic event, according to the well-travelled film director, who just returned from a global tour/premiere of Ebuwa, his latest language film, in the US, UK and Canada, will be featuring amongst other things, screening of over 10 Nollywood movies, in addition to parading about eight top rated Nollywood stars.

Besides, there will be a gala night, where awards and recognitions will be given to deserving individuals and institutions for the promotion of Nollywood. Imasuen, with over 200 films to his credit, advocated the need for film makers to use their art to promote language movies.

He posited that the Ebuwa tour, which spanned over three months, was very successful and has further propagated the ideals of language movies to the rest of the world. Speaking in the same vein, Director-General of the National Film and Video Censors Board(NFVCB), Mr. Emeka Mba, represented at the event by Mr. Cornel A. Agim, Head, Community and State liaison, pledged to ensure that the festival records a huge success.

The board is mandated by the Nigerian High Commission in Canada to select the films that will be screened during the festival. On her own, Mrs. Franca Aernan, renowned actress who represented the embassy, called on both the public and private sectors to proudly support this festival.

Meanwhile, as a film maker with bias for topical and contemporary stories and issues, Imasuen will soon be hitting locations for a movie on Breast Cancer, in collaboration with the publishers of Genevieve magazine. The big budget project, expected to be completed this year, he said, would be used as an awareness/advocacy tool to further help fight the scourge of the disease that is ravaging Nigerian women.