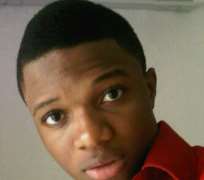 Ever since popular singer, Ayodeji Ibrahim Balogun popularly known as Wizkid burst into stardom on the heels of his monster hit single, 'Holla At Ur Boy,' life has never been the same.

Within a very short space of time,Wizkid suddenly became a household name as millions of music fans across the globe celebrated the glaring success of his musical exploits.

Like a falcon digging its talons into an unsuspecting prey,Wizkid sunk his teeth into the very epicenter of the Nigerian music industry and before you could say Freddie Kugar, his musical identity shone like a super- star.

Two days back, Banky W's manager, Segun Demuren tweeted the experience he had with his client, banky W and Wizkid while at surulere for wizkid's dad birthday party. Segun described how wizkid was mobbed through hundreds of eager fans at the party. And at the end of the day, he couldn't spend more time with his dad.

BankyW and I arrived around 6am, plan was to stay for an hour. We call Wizkid, thinking he would be partying with his Dad and dude is sitting in a car surrounded by like 6 Mopol. And he has been this way since 2pm, at his own Father's 70th gig. I couldn't believe it.

So we get him out and walk into the event (at a school playground by the way), so he can sit with his father. Big Mistake.

In less than 15 seconds, the canopy is swamped, there are 200 phones in the air taking pics, crowd is overwhelming security.

MC is announcing for all to sit down… nothing. Wizkid's mum makes it through, she's scared and wants us to leave to their house.

Since all the security came to this one tent, they left the main gate free, Area boys have made it through. I'm hearing "Wizzy, Wiz, Baba Wizzo

"It's no longer safe, we need to go". We greet Wizkid's dad & make our way to our vehicle, there's at least 150 people around it. What?

So security guy carries Wizkid, one manages to open door, bundle Wizkid and BankyW in it. I manage to squeeze in, my clothes stuck in the door.

We try to get out, (I'm sure we ran over someone's feet), but it's Surulere's tight streets & so a mob starts chasing the vehicle.

So BankyW brings out cash and throws a wad out & they go for that instead. It gives us time to maneuver 5 mins to Wiz's Dad house.

I look at BankyW, I look at Wizkid and I feel completely sorry for these guys. I ask if this is how it is & they say even this is nothing!

Back in the domain of his father's house, a bit quiet, I look at the kid bb'ing, loosely surrounded by 4 hefty guys. He seems alone.

It's his father's 70th birthday & he can't attend it, because his name is Wizkid