THE UNVEILING OF NFC FACE OF THE MONTH.BASKETMOUTH AND I GO DYE 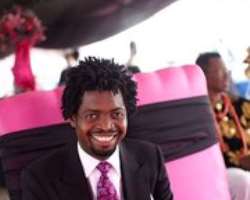 An opinion poll carried out by Nollywoodgists.com on who deserves to be NFC face of the month(November), we are glad to inform you that Basketmouth and I Go Dye pull the highest votes of (170) ,Teju Babyface(70),AY(40), and Koffi(20).

Basketmouth and I Go Dye automatically become NFC face of the month.