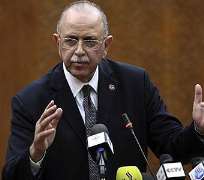 Libya's ruling National Transitional Council has elected little-known academic Abdul Raheem al-Keeb as the new interim prime minister to guide the country as it emerges from a bitter civil war towards a new constitution and democratic elections.

With vast oil and gas reserves and a relatively small population, Libya has the potential to become a prosperous nation, but regional rivalries pent up during Muammar Gaddafi's 42 years of one-man rule could descend into a cycle of revenge.

Keeb, a professor of electrical engineering, will have to rein in the armed militias that sprang up in each town to overthrow Gaddafi and reconcile those remaining loyal to the old rule while brokering a new system to govern the country.

The NTC has promised to hold elections for a national assembly after eight months. The assembly will then spend a year drawing up a constitution ahead of parliamentary elections.

"This transition period has its own challenges. One thing we will be doing is working very closely with the NTC and listening to the Libyan people," Keeb said after 26 of the 51 NTC members elected him for the post in Tripoli on Monday.

An academic and a businessman, Keeb has spent much of his life outside Libya, studying in the United States before taking up academic posts in Qatar and the United Arab Emirates.

NTC members described Keeb as "quiet and friendly" and said he had helped with the financing of the revolt against Gaddafi.

LAST NATO MISSION OVER LIBYA
The prime minister said he expected to choose his cabinet ministers within two weeks.

"We said we would (elect a cabinet) a month from the liberation. We have two weeks left and we intend to meet that deadline."

Keeb did not set out any specific plans for the coming months, but said that worries over foreign oil contracts were unfounded. "We understand that we had 42 years with a brutal dictator ... concerns are in order. But there should be none of them," he said. "We demand respect for our national rights."

Interim Oil Minister Ali Tarhouni had been favourite to become prime minister, but received only three votes, highlighting the unpredictable nature of the emerging politics in the North African state.

Many analysts have pointed to the divisions emerging within the NTC, but Keeb said any fears were unfounded.

The hoped-for departure towards peaceful politics comes as NATO ended its military intervention in Libya which helped bring about the death of Gaddafi.

"It's great to be in Libya, free Libya," NATO chief Anders Fogh Rasmussen told a news conference in the capital Tripoli.

"We acted to protect you. Together we succeeded. Libya is finally free, from Benghazi to Brega, from Misrata to the Western Mountains and to Tripoli."

A NATO statement said an Airborne Early Warning and Control Aircraft used for coordinating the air and sea mission concluded the last alliance flight of the Libyan operation at midnight Libyan time.

It said that since the beginning of the NATO operation, NATO aircraft conducted more than 26,500 sorties, including 9,700 strike missions.

"With this, a successful chapter in NATO's history has come to an end," the statement said.