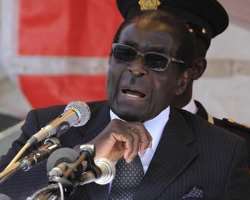 Zimbabwean President Robert Mugabe denied speculation his health is failing and hinted at taking action against Swiss firms in retaliation for his wife and aides being denied visas to visit Geneva, the official Herald newspaper reported on Monday.

Privately-owned media reported last week that Mugabe had travelled to Singapore for a medical check-up, saying it was his eighth such visit this year.

However, speaking after a private visit to an unspecified Asian country, the 87-year-old leader denied age was catching up with him. "You want to ask me about my health? As you can see, this Mugabe is fit," he told the Herald.

According to a U.S. diplomatic cable released by WikiLeaks, Mugabe has prostate cancer that has spread to other organs and was urged by his doctor to step down in 2008.

In the June 2008 cable written by James D. McGee, the former U.S. ambassador in Harare, central bank governor Gideon Gono was cited as saying the cancer could lead to Mugabe's death in three to five years.

Although officials deny he has any serious ailments, analysts say Mugabe's health has probably forced his ZANU-PF party to press for elections early next year -- they are due in 2013 -- but so far it has not loosened his grip on power.

However, Mugabe has slowed down, diplomats have said. His meetings are fewer, while his reported visits to Singapore for medical checks have increased.

Western countries, including the United States and the European Union, imposed travel and financial sanctions on Mugabe and senior officials of his ZANU-PF party almost a decade ago over charges of rights abuses and vote rigging.

Mugabe told the Herald he was surprised and saddened by Switzerland's actions. "Now they are showing that they are vicious and we will reciprocate because they have properties here. We are not without means to reciprocate," Mugabe was quoted as saying.

ZANU-PF has in the past threatened to target for seizure foreign-owned firms from countries supporting sanctions, and is now trying to force mining firms to transfer majority shareholdings to black Zimbabweans.

Nestle Group is the largest Swiss-based firm with operations in the southern African nation. In 2009, Nestle was forced to suspend its local operations, complaining of harassment, after it pulled out of a deal to buy milk from a farm taken over by Mugabe's family.