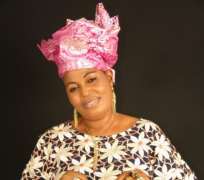 Popular and most sought after by directors and producers in most of the Yoruba movies Lola Idije is cooling off from work in United States of America.

Her real name is Toyin Afolayan and she has paid her dues in terms of contribution and support for the growth of the industry.

We gathered that this woman of substance has been in the states for the past 3 months to rest and also shoot a new film which she plans to launch and premiere in the first quarter of next year.