How I'll Market Delta State To The World - Djebah 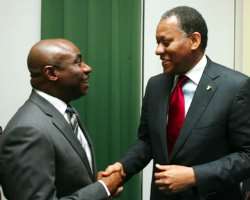 The Senior Adviser on Foreign Relations (SAFRE) to the Governor and Government of Delta state, Mr. Oma Djebah yesterday in Lagos, outlined his policy blueprint on how he will market Delta State and her rich potentials to the global community across the world.

Mr. Djebah, a frontline Nigerian Global Journalist, former Delta State Commissioner for Information (2007-2011) and Harvard - trained Policy entrepreneur told journalists that the dynamics of today’s global environment the necessitated the establishment of the office with a mission to ensure that a better and enhanced foreign image is built and sustained.

Bringing his vast experience in both the private and public sectors of the global community which he has traversed in the last two decades as a top range technocrat, to bear on this new office, Mr. Djebah explained that he will use and leverage all the positive global linkages and network available to him to partner and impact on the development of the administration of HE, Dr. Emmanuel Ewetan Uduaghan for the good of the State and the overall benefits of all Deltans.

He said the “enormous possibility of using the international market place to bring attention to the growing demand of a state like Delta to be a dominant player among foreign governments, international institutions and agencies for the positive development of the state will be engaged to its fullest possibility in order to maximize the potential of a government that is desirous of bringing Delta state to the world and the world to Delta state”.

According to Mr. Djebah who made history as the first and only Nigerian Journalist to date to have addressed the United Nations (UN) on the invitation of the UN Leadership in New York in 2006 and also the first and only till date to have served out a full tenure of four years as Honourable Commissioner for Information in Delta State since the creation of the State twenty years ago maintained it has become a well-established tradition in Nigeria and other Federal government systems across the world for these government levels to assume the initiatives to foster active, positive and productive relations and linkages with foreign governments, international institutions, agencies and organizations either through its indigenes in foreign countries or through foreign sub-national states with enormous strength in economic, development and technological resources that can promote the development of that given unit or state.

Highlighting the strategy for achieving the mandate of SAFRE, the astute administrator who transformed the Delta State Ministry of Information from that of lowly rated establishment to a first line ministry in Delta state during his four years- tenure said he is relying on three critical pillars of international and inter-governmental frameworks to reposition Delta State as Africa’s leading sub-national government in the world. He identified the three pillars as the Delta State’s Outreach/Partnership Unit, the Delta State Diaspora Direct Unit and the Delta State’s Direct Global Programmes Unit to bring deliverables to the people and government of the state.

“Although each component is specially designed to work on its own and bring about progress to the State, each has inbuilt capacity for seamless integration in ensuring the overall success of the work we need to do. The Delta state’s Outreach/Partnership Unit entails building good, credible and highly placed friends, allies and contact for HE, the governor and the state, the Delta State’s Diaspora Direct Unit otherwise known as the D3 which commenced in 2009 will build and sustain positive relations with Deltans in the Diaspora for the overall benefits and development of the state while the Delta State’s Global Programme Unit will focus on ensuring the facilitation of the State government’s active participation in key global programmes across US/Canada, Europe, Asia/Pacific, Africa, the Caribbean, China and the Middle East.

Reacting to questions about how he was able to transform the Delta State information machinery and position the State as global brand, Mr. Djebah who said he would want the past to remain as history until his forthcoming book is published, however alluded to his exemplary and outstanding service as the Commissioner for Information as one of the crucial reason why he is confident that having conquered the local scene where he transformed the almost moribund state information service into a shining example of digital innovation he will definitely succeed at the international level.

Enumerating the contributions he made to revitalizing and ensuring that the state information ministry becomes one of the most vibrant since the creation of the state, Mr. Djebah spoke about his famous THREE R’s ministerial initiative- Revamp, Re-organize and Reposition- noting that the creation of the True Face of Delta State to rebrand the state and project its people as peaceful, united, resourceful, overtly accommodating and developing was the holistic brand that launched the state from its traditional enclaves.

“My tenure as the Commissioner for Information in Delta state is a watershed of innovations, improvement and the creation of an enabling environment that has provided an unprecedented leeway for whosoever shall be appointed as Commissioner of Information in the state. It gives me the confidence and the assurance that having conquered at the local level I am prepared and fully empowered to take Delta state to the world and bringing the world to Delta state.”

“On my assumption of duty we set out to position the Ministry as an organization which will proactively manage information within the Delta Government and between the State Government and its various publics especially the citizens of the state. We came on board in August 2007, together with my team by the end of the year we have launched the best and most aesthetically outstanding newspaper in the history of publishing in Delta state.

“We will long be remembered for hosting the first ever Information Summit in Delta state which brought about a series of events that revolutionized the future of the Ministry culminating in a synergy of civil society, Deltans in Diaspora, the media and other stakeholders in Delta. It produced a cluster of activities which positioned the ministry as the most vibrant and innovative in the state. It provided a veritable platform for publicizing holistically the mission, vision and achievements of the administration of HE Dr. Emmanuel, Ewetan Uduaghan at the local level. We are set to replicate those groundbreaking achievements at the international level.”