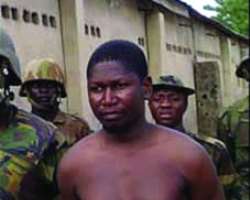 An Islamic cleric was shot dead in Maiduguri over the weekend by gunmen suspected to be of Boko Haram sect, even as an early morning bomb blast targeted against the Joint Task Force (JTF) men rocked the city yesterday.

Some gunmen were said to have stormed the residence of the Islamic cleric, Ali Gana at Kaleri ward on Saturday at about 7.15pm and shot him severally, leaving him in his pool of blood.

Daily Sun also learnt that the early morning bomb blast occurred at a check point at Bulabulin Ngarnam ward within the metropolis at about 7.30 am yesterday, a development which made many residents to panic. However, no life was lost in the blast.

Confirming the blast and assassination of the Maiduguri cleric, Operation Officer of the Joint Task Force (JTF), Col. Victor Ebhaleme told Daily Sun on phone that the blast went off early in the morning. 'The improvised explosive went off early in the morning and our men were the target at a checkpoint but it only raised dust, nobody was injured and no life was lost,' he disclosed.

He also said the JTF operatives were still in search of the perpetrators of the killing of the Islamic cleric even as he said there was no arrest as at the time of filing this report. 'The man was killed on Saturday night but we are combing the area in search of the hoodlums. We haven't made any arrest yet, we're still looking for the perpetrators,' he declared.

Col Victor who expressed dismay over a report published by an Abuja-based daily on its Sunday title, claimed the report was misleading and untrue. 'How can a newpaper that ought to help educate the people choose to mislead?' he asked, adding that the report which claimed that the streets of Maiduguri were deserted and that 90 per cent of businesses have relocated out of the state was done in bad light.

'It is also reckless for Daily Trust to say that JTF was arresting and beating vendors in Maiduguri. The report which was purportedly generated from a paper presented by the newspaper north east regional manager was untrue and highly sentimental. The public should know that Daily Trust has been consistently biased and this is not journalism. We known journalism is a noble profession and newspapers were not established to promote religious or sectional interest,' he added.

Commenting on the October 31 ultimatum for those in possession of illegally acquired weapons to surrender to some designated centres, he maintained the JTF would not extend the date. He urged those still having arms to surrender within the remaining days, warning that 'anybody found with such illegal arms would be treated as criminals.'