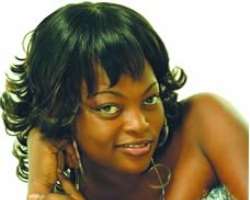 When will the rumour making the rounds that Funke Akindele (aka Jenifa) is dating Femi Adebayo ever end? We honestly don't know. What we can, however, tell you is that the star actress is not pregnant for the married actor as it was reported last week.

In a chat, the star actress says she is not in anyway pregnant for Femi. 'I don't know where the rumour started from. I am not pregnant as you can see.

Femi is just a friend and colleague. Those behind the rumour are malicious and wicked. This is work of detractors and I shall not be swayed'.

Funke, who recently returned from South Africa alongside other Glo ambassadors where they went to shoot television commercials for the telecommunication giant, recently took delivery of a Toyota Xtera SUV. She has been cruising around town with it. 'It is reward for my hard work', she says.