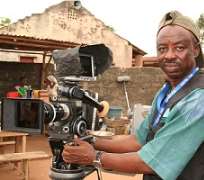 The film school is set to elevate the skills of Nigerian film and Television professionals.A press conference was recently held to unveil the partnership.

"Training of professionals had been an adhoc exercise over the last decade in Nigeria because just a few have the time, resources or inclination to plan for longer-term training"Tunde kelani said at the press conference.

“With AFTTA, we are offering the level of advanced training that would normally only be available in other distant countries and otherwise could not be affordable,” Kelani said.