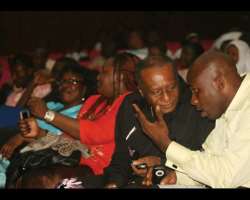 The 2009 Lagos International Film Festival (LIFF) with 'Promoting Policy Instruments for Cinema Development in Africa' as its theme held from August 11 to 16, 2009 at the National Theatre, Iganmu, Lagos.

Established by Madu Chikwendu in 1996 as the National Conference on Entertainment, LIFF transformed into the African Video Expo in 2005 and was finally rebranded as the Lagos International Film Festival in 2006.

Apart from some recently released Nollywood movies that were screened during the festival, a forum was also held where factors responsible for the recession in the Nigerian movie industry were discussed.

The chief executive of the festival, Chikwendu, Fidelis Duker, Kanayo O. Kanayo, Teco Benson, Chico Ejiro and Tony Ameh were some prominent Nollywood actors present at the opening ceremony on Tuesday, August 11. Moderator, Harris Chima added a touch of drama as he dramatically cried 'Standby... Action' as cue for guests to sing the National Anthem.

Nollywood will survive without the government

In his opening speech, Femi Jarret, veteran TV soaps producer and a protégé of the late music impresario, Steve Rhodes said the Nigerian movie industry rose to the second position in the world after America's Hollywood without assistance from the government.

Apart from Nollywood, Jarret also accused the government of neglecting many relevant areas which would have improved the lives of Nigerians,

"We don't need government. We can do it and when we do it, government will come to beg us," the man who had minor roles in 'The Village Headmaster' said. He prayed that there would be better attendance at the next edition of the festival and urged the crowd to shout seven halleluiahs. The festival was declared open thereafter.

In God we trust

Kanayo O. Kanayo, whom others hailed as the interim president of the Actors Guild of Nigeria (AGN), said that the festival is a plus for not just the creative community in Nigeria but in West Africa because whatever is set as precedence in Nigeria becomes the norm for other West African countries.

Chikendu, Teco Benson, Bond Emeruwa and Chico Ejiro spoke about the recent meltdown in Nollywood. Benson said that although things are tough, he does not expect it to affect the annual festival. All the actors however prayed that God will see the industry through its trying period.

In continuation of the dramatic precedent set by the moderator, Tony Ameh, president, Script Writers Guild of Nigeria said he was not happy that writers were not acknowledged first before other groups. He argued that script writers are the foundation of motion pictures and should always be duly acknowledged.

The tough-talking head of the script writers also asked the representatives of the Nigerian Film Corporation in the audience to take a message to the government in Abuja that it is obliged to support the Lagos International Film Festival.

Honoured to be here

One of the judges of the Golden Camel Awards held as part of the festival, Jenny Miller from the US who had been in Nigeria six weeks before the festival said she felt honoured to be part of the event.

Although a forum for filmmakers, the occasion didn't lack musical presentations. The crowd loudly applauded Standfill when he sang his hit song 'Ja mi ni Gbedu'.

Another musician, Hero who had guests gyrating to his number 'Na who laugh last dey laugh best' was also appreciated with a sustained applause.