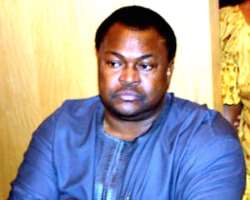 One of the nation's giant telecommunication companies, Globacomm owns by the former cab driver, now one of the richest men in Africa,

A top shot in Globacom, we gathered, has made it mandatory for every appointee who benefit from the N20 million's 2-year endorsement deal to part with a sum of N1m each and this alleged fee, information has it, is sent through Mr. Nzordi, the middleman who had earlier placed them on the condition that they should be settled before being shortlisted for the contract.

This singular act, we later gathered, infuriated Gene as the movie idol that has just jumped into fashion is called, cost the youthful manager his job as she was said to have sacked him without a blink. “Stella Damasus and Ebube Nwagbo were said to have not responded on time with their contract form hence their removal from the juicy deal which also has D'Banj, Sammy Okposo, Mike Ezunronye, Adaobi etc as beneficiaries.” One of the committee told us.

Preparation for the third batch of the contract, according to inside sources, has begun and some Nollywood personalities who were not part of the first and second deal are said to have started lobbying with money, 'body', spirit and soul to be listed, we were informed.